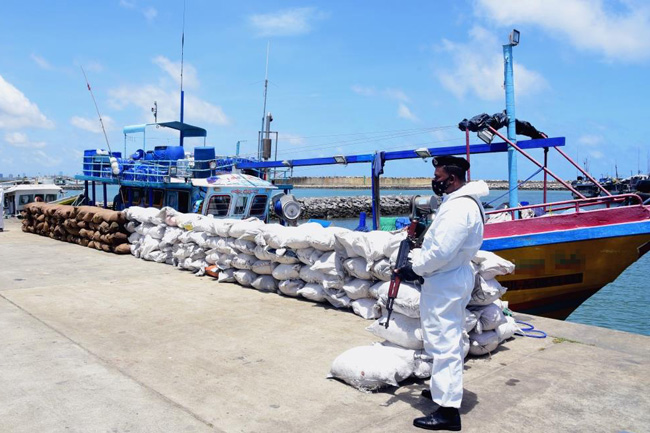 Four attempting to smuggle in over 6,300kg of turmeric apprehended

Sri Lanka Navy has apprehended four individuals who were attempting to smuggle in 6,381kg of Turmeric in the seas off Chilaw.

Upon detection of a suspicious trawler in the sea area about 10 nautical miles (18km) off the Chilaw Point, the Navy had seized the suspects who were aboard, along with gunny sacks stuffed with turmeric, on Tuesday (11).

Subsequently, the trawler and smuggled items held by the Navy were brought to the Dikkowita fisheries harbour for further investigation, as it was difficult to conduct a full-scale inspection at sea due to concerns of the pandemic, the Navy said.

The haul of consignment, nearly 6381kg in wet weight, was handed over to the Sri Lanka Customs for onward investigation, after proper decontamination.

On the assumption that the 04 suspects had close association with Indian smugglers out at sea, they were referred to quarantine process together with their family members, following the directives of health authorities.

Meanwhile, based on information revealed by the 04 suspects aboard, the Navy in coordination with the Sri Lanka Coast Guard and Chilaw Police carried out another raid in the town area of Chilaw and apprehended 09 more individuals who were believed be prospective dealers in connection to the same incident.

A minivan and cash worth more than Rs. 2.24 million in their possession were also held during this raid. The accused were identified as residents of Wattala, Katugastota, Kandy, Beruwala and Thoduwawa areas, from 27 to 66 years of age. It was further revealed that the owner of the trawler was also among the group of accused. Meanwhile, the detainees together with their belongings were produced to the Chilaw Police for onward legal action.