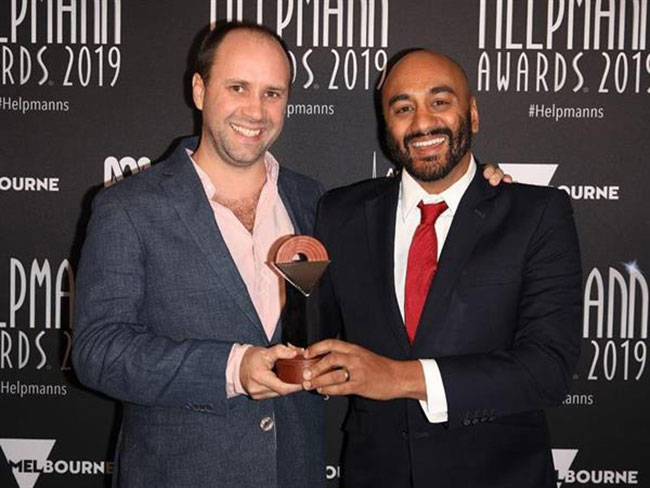 Eamon Flack and S. Shakthidharan pose with their Helpmann Award for Best Direction of a Play. Photo credit: Getty Images

Its success suggests a significant shift in the cultural landscape towards works which more accurately reflect contemporary, multicultural Australia.

Counting & Cracking is also nominated for Best New Australian Work, alongside Spinifex Gum, Barbara and the Camp Dogs, Blackie Blackie Brown: The Traditional Owner of Death, The Harp in the South: Part One and Part Two and Lé Nør (The Rain). The winning work will be announced on Monday night.

Accepting his award with Flack, Shakthidharan said: ‘I think Australia is at a bit of a crossroads and we can eat up what everyone is telling us and retreat into our tribes, and best case scenario is that we tolerate each other – or we can take a deep breath and … embrace the messiness and gloriousness of solidarity.

‘I’ve grown up listening to and watching stories that aren’t my own and I’ve found ways to relate, so if you’re scared please don’t be – there’s a lot more stories coming out there but if we take the deep dive into them you’ll find a way to relate to them as well, and I think we’ll all be the better for it,’ he said to applause.

The Helpmann Awards ceremony is staged across two nights, with more awards to be presented on Monday evening at Arts Centre Melbourne.

The split ceremony marks the first time the Helpmanns have been presented in Melbourne.