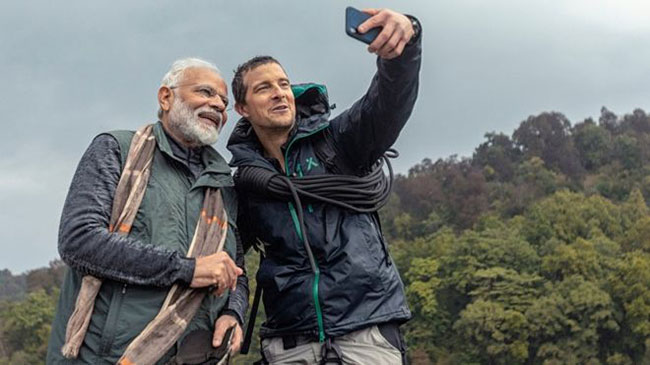 Filmed in India’s Jim Corbett National Park, it showed the men smelling elephant dung, and crossing a fast-flowing river in a raft made of reed.

Mr Modi said it was filmed to throw “light on environmental conservation and climate change”.

Mr Modi has been known to use social media and celebrity power to reach younger voters and widen his mass appeal.

In March, he unleashed a barrage of tweets at Bollywood stars asking them to use their influence and get more people to vote; and in April he sat down with Bollywood actor Akshay Kumar for an interview.

After his appearance on Grylls’ show, some people praised the prime minister for his “candidness” - he discussed a range of topics from his political and personal life, to his love for nature.

“My problem is that I have never experienced such fears,” Mr Modi said when asked about “nervousness”.

“I am unable to explain to people what it is and how to deal with it because my in-built temperament is very positive. I see positivity in everything and because of that reason, I am never disappointed.”

“[Narendra Modi] has never experienced fear or nervousness. This should shake Pakistan to its core” said one user, referring to current escalating cross-border tensions.

One tweet even showed Grylls’ face photoshopped on to the body of a worker from the Hindu nationalist Rashtriya Swayamsevak Sangh (RSS), which is the ideological fountainhead of Mr Modi’s ruling Bharatiya Janata Party (BJP).

Mr Modi was also a member of the organisation.

Parody videos also appeared on Facebook after Mr Modi shared a childhood memory about the time he brought a baby crocodile home.