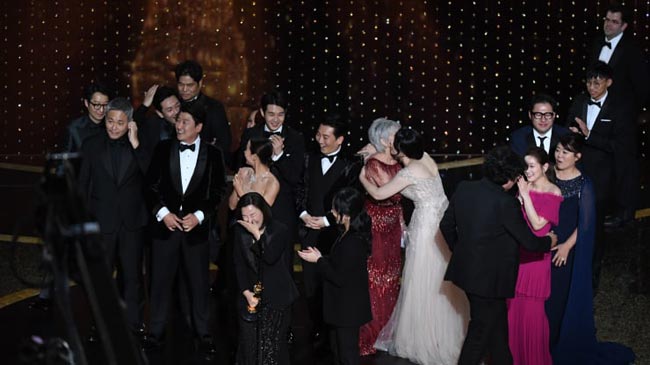 For the first time in the 92-year history of the Academy Awards, a film not in English won best picture. It was the capper for a historic night of triumph for director of ‘Parasite’, Bong Joon Ho, who must have needed a shopping cart for all of his Oscars.

Everyone expected the critically acclaimed and fan-favorite social satire to win for best international feature, but Bong Joon Ho’s win for best director and the victory for original screenplay were unexpected — not to mention the biggest prize of all, best picture.

It wasn’t a huge upset, as “Parasite” seemed to be gaining momentum over “1917” in recent weeks. But it still made for quite the moment — especially when the lights briefly went down during the onstage celebration featuring the “Parasite” cast and creative team.

“I am very ready to drink until next morning,” said Bong Joon Ho in English after the international feature triumph.

Brad Pitt and Laura Dern and Joaquin Phoenix and Renee Zellweger had their expected crowning moments in the acting categories; non-hosts Chris Rock and Steve Martin delivered a killer comedic monologue; Janelle Monae performed an opening number complete with Dancing Jokers in the background — and Eminem performed “Lose Yourself” some 17 years after it won Oscar for Original Song.

Phoenix delivered a rambling but passionate speech about human rights and animal rights and respecting the planet, thanked many in the room for giving him a second chance and closed by quoting a lyric written by his late brother River when River was just 17: “Run to the rescue with love, and peace will follow.”

The 2020 Oscars didn’t make for the most exciting television — the pace is always going to be sluggish when you’re handing out two dozen awards — but it was an intermittently entertaining show.

Taika Waititi won best adapted screenplay for his irreverent, wicked-smart and multilayered script of “Jojo Rabbit” — an upset over Greta Gerwig and “Little Women.” Between “Jojo” and original screenplay winner “Parasite,” you’d be hard-pressed to find a more subversive pair of winning screenplays in recent history.

The host-free Oscars opened with the dynamic Janelle Monae performing “A Beautiful Day in the Neighborhood,” before raising the roof, as the kids say, and fronting a strange but energetic opening welcome number.

Can’t say I was onboard for the dancing Jokers and Dolemites and World War I soldiers, but Monae definitely won over the live audience, earning a standing ovation for her performance.

To the surprise of nobody, Brad Pitt won best supporting actor (and deservedly so) for his sharp and funny and empathetic work as a stuntman in “Once Upon a Time in Hollywood.”

With his typical style and grace, Pitt thanked his co-star, Leonardo DiCaprio (“I’ll ride your coattails any time”); saluted stunt crews; dedicated his award to his children and came close to choking up as he looked back on his career.

He also shoehorned in a little political commentary, suggesting Quentin Tarantino made a movie about the recent impeachment hearings, only this time, “in the end, the adults do the right thing.”

Prior to Pitt’s win, Chris Rock and Steve Martin took the stage and delivered a knockout one-two punch of a monologue.

“We both have hosted the Oscars before and this is such an incredible demotion,” deadpanned Martin.

Rock made a number of spot-on observations about the lack of diversity among the acting nominees, including this crack: “Cynthia [Erivo] did such a great job in ‘Harriet’ hiding black people, the Academy got her to hide black nominees.”

And as the cameras focused on an uncomfortable-looking Jeff Bezos, Rock noted Bezos is so wealthy, “He got divorced and he’s still the richest person in the world.”

Smooth and casual, irreverent without being obnoxious, and just plain funny: Steve Martin and Chris Rock, ladies and gentlemen. They were fantastic as the non-hosts.

Why exactly was Eminem here some 17 years after winning the Oscar for “Lose Yourself”?

Well. He’s got a new album to promote. And back in 2003, he stayed home in Detroit with his young daughter, because he thought he had no chance of winning.

A short while later, Cynthia Erivo took the stage to perform “Stand Up” (which she co-wrote) from “Harriet.”

It was a glorious, beautiful, knockout performance from a rising star who will win virtually every showbiz trophy imaginable before she’s done.