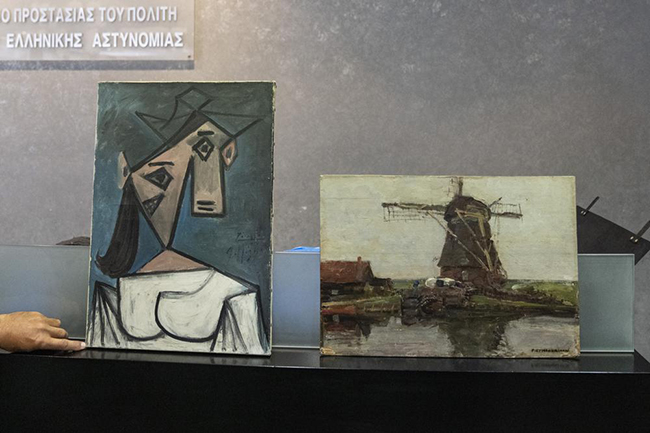 Greece has recovered works of art by Pablo Picasso and Piet Mondrian, stolen from its National Gallery in 2012, authorities said on Tuesday.

Thieves broke into the gallery and snatched Picasso’s 1939 painting “Woman’s Head”, donated by the Spanish artist in 1949, and Dutch painter Mondrian’s “Mill” dated 1905.

To mislead the guard, the thieves had activated the gallery’s alarm system several times before breaking into the building early in the morning. The guard turned off the alarm only to spot one of the thieves through the motion detector.

On Monday, authorities arrested a 49-year-old Greek man who confessed that he had stolen the paintings and led police to a forest outside Athens where he had hidden them, the Citizens’ Protection Ministry said on Tuesday.

Footage handed out by police from the site showed one of the paintings sealed in a package sitting under the bushes.

The arrested man said a sketch by Italian painter Guglielmo Caccia, donated to the gallery in 1907 and also stolen in 2012, had been destroyed, the ministry said.

At a joint news conference with Citizens’ Protection Minister Michalis Chrisochoidis, Culture Minister Lina Mendoni said the Picasso painting bore an inscription of the painter to the Greek people for their fight against fascism.

“That is the reason why it was impossible for the painting not only to be sold but also to be exhibited anywhere,” Mendoni said.