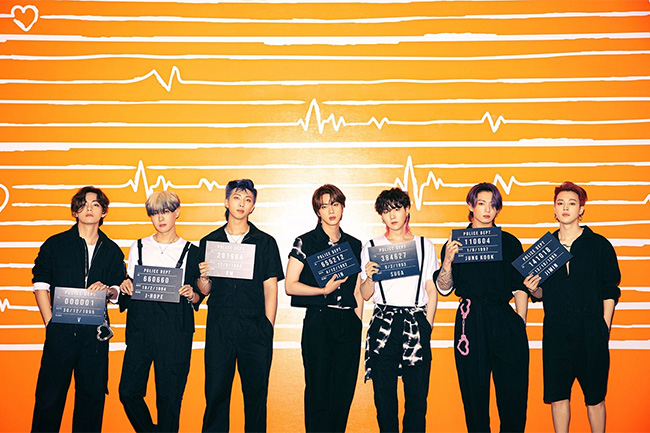 South Korean boy band BTS has gracefully replaced its own No. 1 song, “Butter,” at the Billboard Hot 100 chart with another hit -- “Permission to Dance.”

The latest track officially debuted at No. 1 on this week’s Hot 100, while “Butter” bowed to the seventh spot in the charts after seven weeks in the lead, Billboard said.

BTS is now the first act to replace its No. 1 hit with another chart-topping track since rapper Drake in 2018, Billboard tweeted Monday.

“Permission to Dance” is the fourth BTS song to land the No. 1 spot on the competitive music chart. Previously, the boy band’s first all-English song, “Dynamite,” stayed three weeks at No. 1, while “Life Goes On” stayed for one week in December 2020, and “Butter” had been in the lead for seven weeks since June.

With four No. 1 debuts in the charts, the septet joins Ariana Grande, Justin Bieber and Drake as the artists with the same accomplishments in their career.

Similarly, BTS joins the ranks of The Beatles, BoyzIIMen, Outkast and Black Eyed Peas in the category of duo or group, who replaced their own No. 1 song with another No. 1 song on Billboard’s Hot 100.

BTS was able to achieve five No. 1 songs on the chart for a total of 10 months and two weeks. This marks the quickest five No. 1 hits in three decades since Michael Jackson, Billboard noted.

The fifth song, “Savage Love,” was originally released by Jason Derulo in June 2020, but was remixed with BTS singing Korean verses and released anew in October stayed one week as No. 1 on the chart.

“Permission to Dance” is the group’s second collaboration with British singer-songwriter Ed Sheeran, following “Make It Right” in 2019. The song is part of the album, “Butter,” which also contains instrumental versions of the two songs.

Forbes on Sunday said “Butter” sold over 1.9 million CDs in its first week of release.