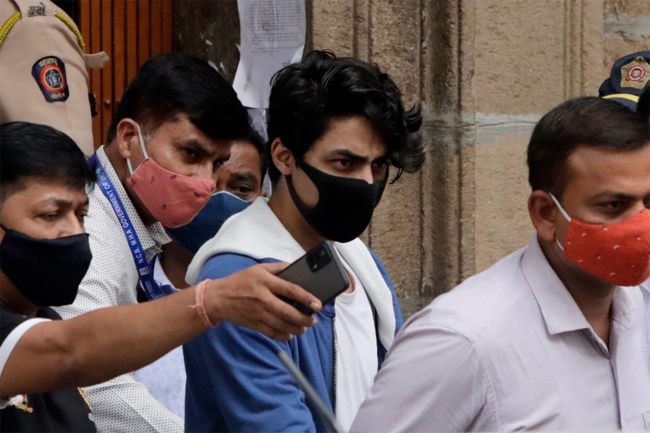 Aryan Khan, the son of Bollywood superstar Shah Rukh Khan, has been released from a jail in Mumbai after he was arrested during a cruise ship drugs bust in a case that has gripped India.

Aryan, 23, the eldest son of the actor dubbed the “King of Bollywood”, was detained earlier this month along with 19 others after the Narcotics Control Bureau raided a ship set to sail from Mumbai to Goa.

He was given bail on Thursday along with two others by the High Court of Bombay on their fourth attempt. On Saturday, he was released after spending 22 days behind bars.

The case has featured in headlines across India, dominating front pages and receiving non-stop coverage on news channels.

Some have claimed that Aryan, a Muslim, is a victim of religious persecution in a country governed by a Hindu-nationalist party.

Social media has been flooded with messages of support for the family, with many calling the arrest a witch-hunt.

Fans and media gathered outside their residence on Saturday while the family has also received support from several Bollywood A-listers.

The officer investigating the case, Sameer Wankhede, is facing an internal probe within the narcotics bureau and another by Mumbai police over allegations of bribery and extortion related to the case.

The Narcotics Control Bureau has alleged that Aryan is a regular user and supplier of drugs, while it has also said that their investigation revealed an international drug connection and found drug-related WhatsApp chats on his phone.

The high-profile case comes a year after the suicide of Bollywood actor Sushant Singh Rajput and the arrest of his ex-girlfriend, actress Rhea Chakraborty, for allegedly buying him drugs.

Her arrest sparked a wider probe into drug use in Bollywood, with superstar Deepika Padukone and others hauled in for questioning.