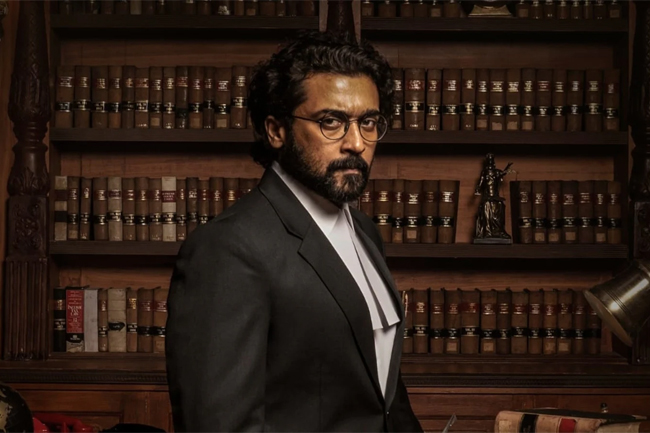 Jai Bhim: The Indian film that overtook The Godfather on IMDb

Jai Bhim, a Tamil language film, has been rated the top film by users on IMDb, beating classics such as The Shawshank Redemption and The Godfather.

It’s the latest in a line of hard-hitting Indian movies telling stories of repression against Dalits who are at the bottom of a rigid Hindu caste hierarchy, writes film journalist Aseem Chhabra.

At the beginning of Jai Bhim, police officers are shown separating a group of suspects based on their caste.

Those who are from the dominant castes are asked to leave, while others who are Dalits (formerly untouchables) or belong to tribal communities are asked to stay back. Later, police file false charges against those in the second group.

It’s a stark, disturbing scene, with frightened men standing in the corner, somewhat aware of their fate - a reminder that such activities occur routinely, and how precarious are the lives of the marginalised, especially Dalits, in small towns and rural India.

Dalits make up about 20% of India’s population, and despite laws to protect them they continue to face discrimination and violence.

Jai Bhim’s title translates to “Long Live Bhim”, a slogan made popular by the followers of BR Ambedkar, a Dalit scholar and leader, who was the chief architect of India’s constitution and also the country’s first law minister.

Directed by TJ Gnanavel, and backed by Tamil star Suriya, the film tells the true story of a crusading lawyer - played by Suriya - who fought for a petition filed by a pregnant woman whose husband was placed in police custody and later declared missing.

Jai Bhim is part of a new movement in Tamil cinema where a number of young filmmakers are narrating stories of repression against Dalits.

“In the last 30 years, beginning with the observance of Ambedkar’s centenary in 1991, the Dalit movement has been growing in Tamil Nadu,” said film historian S Theodore Baskaran.

“Forgotten Dalit ideologues of the 20th Century were redeemed from history. The ideas of [social activist and politician] Periyar and Ambedkar spread through the writings of many Dalit writers. In the last decade, some of the writers moved to cinema and made films. But they used the usual ingredients like songs, fights and melodrama.”

Now, Dalit narratives have also found space in independent or indie films in other Indian languages, including Anhey Gorhey Da Daan (Punjabi), exploring the lives of Dalit Sikhs; Masaan (Hindi), a romance between a young man from a family of crematorium workers and an upper caste girl; and Fandry and Sairat (both in Marathi). The last two films were directed by Nagraj Manjule, a Dalit himself.

Fandry narrates the story of a young boy whose family catches pigs in the village, and his unrequited love for an upper caste girl. Sairat, an inter-caste romantic musical, was a huge box office success. Also in this group is the Tamil indie, Pebbles (Koozhangal), India’s official entry for the 2022 Oscar for Best International Film.

But now there are many filmmakers in mainstream Tamil cinema whose protagonists are Dalits - who after a long period of discrimination fight for their rights. And when the legal recourse does not end their suffering, they are willing to take the fight to a physical level.

The directors include veteran filmmaker Vetrimaaran, who made Visaaranai, a 2015 film about the plight of Tamil migrants in neighbouring Andhra Pradesh, and Asuran, a plot inspired by a massacre of Dalits. Mari Selvaraj and Pa Ranjith, both in their late thirties, are two key directors who have created narratives where the Dalit man is the central character.

“The representation of Dalit characters was painful,” Dalit filmmaker Ranjith, often referred to as the Spike Lee of the Tamil film industry, told The Wire in a 2020 interview, referring to earlier Tamil films. “Either they were written out, or just their inclusion in the story was considered ‘revolutionary.’“

“In this context, I had to reflect on what my stories could say,” he added. “I wanted to show that my culture itself is based on discrimination and violence…Today, directors are more conscious when they write Dalit characters.”

Ranjith produced director Mari Selvaraj’s first film Periyerum Perumal. The film opens with a card that reads “caste and religion are against humanity.” The film’s protagonist wants to become a lawyer like Ambedkar.

Towards the middle of Periyerum Perumal, Selvaraj has a group of men dancing to a 1983 film song Poradada. Composed by Ilaiyaraaja, a legendary musician and a Dalit himself, the song’s lyrics include: “We will take over your throne/… Our cry for victory will be heard/ Our light will fill up this world/ We the proletarians will fight back.”

The song also plays in the background in Selvaraj’s Karnan (2021) and is now referred to as a Dalit anthem.

Ranjith’s films were boosted with the support of Rajnikanth, the superstar of Tamil cinema. The actor was moved by the stories narrated to him and agreed to play the lead in Kabali (the tale of a violent gangster world of Tamil migrants in Malaysia) and Kaala (set in Dharavi, Asia’s biggest slum located in Mumbai, with a large Tamil migrant population).

And in his latest film, the nearly three-hour-long Sarpatta Parambarai, Ranjith explores the boxing culture among Dalits in Chennai city, deeply influenced by Mohammad Ali, and his activism, whether it was against the Vietnam war or racism in the US.

There are some who feel that the representation of Dalit characters in Tamil cinema does not deserve all the praise that it receives. Leena Manimekalai, director of the 2019 film Maadathy: An Unfairy Tale - a disturbing story about a young woman from an ostracised Dalit community - feels the new cinema has not exactly moved the needle.

“I still see women characters portrayed as mere props or cheerleaders to their husbands/lovers and the underprivileged communities ‘waiting’ for their heroes to save them with their axes, guns and sickles, from generations of discrimination.”

But it is clear the audience is watching the new cinema. Jai Bhim did not open in theatres so there are no box office numbers to support its popularity. But its 9.6 user rating on IMDb has propelled it to the number one slot on the online database.