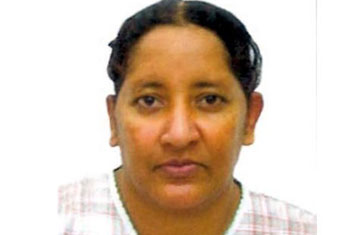 A Sri Lankan housemaid was kept against her will by her Saudi sponsor and not paid since she came to the Kingdom in 1997, sources from the Jazan governorate said.

According to the sources, the authorities rescued 45-year-old Weerawardena Hettiarachchilage Indrani Mallika Hettiarachchi and arrested the sponsor on instructions from Jazan Gov. Prince Muhammad bin Nasser, who had been tipped off about the maid by a kind-hearted Saudi living in the neighborhood.

It was the governor who took prompt action to rescue the maid from the clutches of the Saudi sponsor, who had kept her in captivity since she came to Jazan in 1997, Deputy Jazan Gov. Abdullah Mohamed Al-Suwaid said.

The authorities had admitted her to the Social Affairs Protection Center in Jazan where she will stay until the sponsor pays her outstanding wages.

According to Al-Suwaid, the Saudi sponsor, who is currently in custody, had said that he cannot afford to pay the estimated SR60,000 in outstanding wages.

Hettiarachchi has two children back home  20-year-old son Asanka Pradeep who is handicapped and 19-year-old daughter Dilrukshi who has just finished school.

The maids husband Sunil Premathilake told Arab News over the phone from the historical Sri Lankan city of Polannaruwe, 300 km from the capital of Colombo, that his family thought Hettiarachchi had died since there had been no news about her from the Kingdom.

I am very happy to know that she is living and we want her back home as quickly as possible, he said.

According to Jeffrey, Al-Suwaid had promised that authorities would make arrangements to pay some outstanding wages to the maid and she would be repatriated home within two months.

Al-Suwaid also said that he would claim as much as possible from the sponsor and top up the rest using state funds, Jeffrey added.

The diplomat thanked the National Society for Human Rights who were taking a special interest in Hettiarachchis case.

Jeffrey said the maid did not report any ill treatment from her sponsor. She wants to go home quickly to see her children.

Last year, there was a case of a Filipino maid being held in captivity in the Eastern Province. The maid, who claimed to be sexually abused, by her Saudi employer escaped with the help of  Philippine Overseas Labor Office in Alkhobar after six months, Arab News reports.