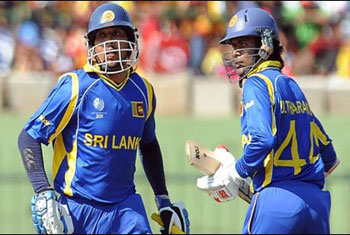 Sri Lanka were bowled out for their lowest ever one-day international score as South Africa thumped them by 258 runs in Paarl. South Africa batted first and posted an imposing 8-301 from their 50 overs, with Hashim Amla (112) and Jacques Kallis (72) leading the way.

They could have scored more if not for a batting collapse in the final stages but it mattered little as Sri Lanka were embarrassingly bowled out for just 43 in response.

Morne Morkel (4-10) and Lonwabo Tsotsobe (3-19) were the chief destroyers for the winners as the tourists scored the fourth-worst score in one-day international history.

Sri Lankan captain Tillakaratne Dilshan (zero) followed in the next over when he edged behind off Tsotsobe and Dinesh Chandimal (four), Kumar Sangakkara (four), Angelo Mathews (zero) and Mahela Jayawardene (two) all showed no resistance as they slumped to 6-13.

Morkel and Tsotsobe had done all the damage to that point but the introduction of Robin Peterson (2-5) and Dale Steyn (1-7) led to more carnage, with the latter snaring the wicket of Nuwan Kulasekara (six).

Peterson bowled Malinga before taking the catch that removed Kosala Kulasekara #8211; who amazingly was the only Sri Lankan batsman to pass six runs; on the mid-wicket fence as he trudged off with 19 from his 46 deliveries at the crease.

Peterson wrapped up the rout when he trapped Fernando lbw as Sri Lanka lasted just 108 minutes and 20.1 overs with the bat.

Earlier, Amla and Kallis gave South Africa the upper hand with a superb 144-run partnership that set their innings up.

Malinga (5-53) dismissed Graeme Smith (six) early, but the hosts quickly got to work as unusually, Amla played the anchor role while Kallis was the aggressor.

The pair turned the strike over freely and opted for accumulation rather than unnecessary big-hitting and it paid dividends until Kallis was run out by Mahela Jayawardene.

New captain AB de Villiers (52 from 40 balls) swung from the word go and whacked seven boundaries while Amlas patience was rewarded when he turned the ball of his pads down to fine leg for a two that brought up his century.

Just two balls later de Villiers was bowled and in the hunt for late runs, Albie Morkel (25), Amla, JP Duminy (one), Faf Du Plessis (10) and Steyn (one) were all dismissed as Sri Lanka took 6-60 from the final 10 overs.

It proved academic in the end though, as South Africa romped home to an emphatic victory which gives them a 1-0 lead in the five-match series, Sky News reports.