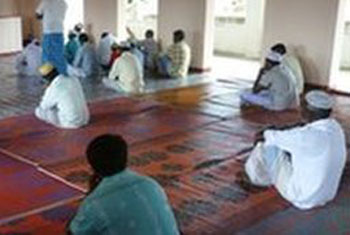 Sri Lanka has reportedly ordered 161 foreign Muslim preachers to leave the country for flouting visa regulations. A senior immigration official was quoted as saying that the clerics had no right to preach in mosques because they had arrived on tourist visas.
He also said that some local Muslims had complained that the visitors were not teaching a moderate form of Islam.
The preachers - from Bangladesh, India, Pakistan, the Maldives and Arab nations - must now leave by 31 January.
Laughable idea
They have violated immigration laws. A tourist visa is to have a holiday or visit friends and family, and not to preach Islam, Sri Lankas immigration head Chulananda Perera told the AFP news agency.
Mr Perera said the group belonged to Tablighi Jamaat - an international Islamic movement popular in Sri Lanka and the region.
A Muslim source told the BBC that the movement sends groups of preachers to places of worship, urging Muslims to devote more time to their faith and act more devoutly.
Any idea that they were militant was laughable, the source added.
Muslim members of Sri Lankas government have expressed concern at the mass expulsion, and are expected to meet other officials later on Monday to try to delay the move.
The news has also created consternation in the Muslim community in Sri Lanka, the third largest ethnic group in the country after Sinhalese and Tamils, the BBCs Charles Haviland in Colombo reports.
During the long civil war the community was often caught between the two warring parties and it has a reputation for moderation, our correspondent adds, BBC reports.
Disclaimer: All the comments will be moderated by the AD editorial. Abstain from posting comments that are obscene, defamatory or slanderous. Please avoid outside hyperlinks inside the comment and avoid typing all capitalized comments. Help us delete comments that do not follow these guidelines by flagging them(mouse over a comment and click the flag icon on the right side). Do use these forums to voice your opinions and create healthy discourse.