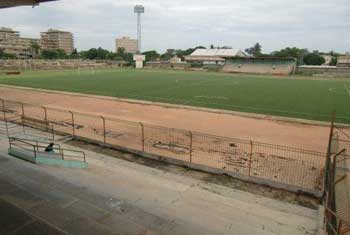 Some two hundred Sri lankan refugees stranded in the tiny West African state of Togo have told the BBC that they fear for their life if they are deported back to their country.

They are detained at an open stadium, in the countrys capital Lome, which they say belong to the Military.

We have been arrested and detained here on charges of over staying our visa period since 24th October last year and have been told that unless we voluntarily return to Sri Lanka, we would be deported forcefully a resident at the detention centre told the Tamil Service.

Over 200 people mainly from the North and East of Sri Lanka, sought to flee from the country with the aim of arriving in Canada through boat, who have been duped by an agent and dumped in Togo, the inmates in Lome detention centre say.

They say they were taken from Colombo to Mumbai and then to Addis Ababa from there and onto Lome by air on visit visa and where holed up in five houses, being assured that they would be taken to Ghana and from there by boat to Canada.

Officials from the United Nations High Commissioner of Refugees, International Organization for migration- IOM and Canadian govt along with the local immigration officials have visited them and have told them that it would be better to be deported than being put in the local prison according to the detainees.

Repeated efforts to reach the officials of the government of Togo for their comments have failed and BBC is unable to independently verify the claims of the detainees.

Many of us were in Mullivaikaal-where the final phase of the war took place, and if we are deported back, our safety and life will be in jeopardy another inmate told.

But another detainee says that they have lost all hopes of their further onward journey to Canada and have now resigned to their fate of going back to Sri Lanka, rather than being put in local prisons in Togo.

Many people from the war torn North and East of Sri Lanka have been continuously attempting to leave illegally by boat either heading for Australia or Canada.

Both the countries have tightened their immigration laws and have resisted these types of attempts. Even people who arrived in two boats last year are yet to be fully cleared and granted asylum in Canada, while many of them have either been detained in an Australian detention centre or in Indonesia or Malaysia en route.

The detainees in Togo say that they are provided food by the ICRC though they allege its insipid and insufficient.

Every morning we are woken around 4.30AM and by 6 AM we will be asked to sweep the entire stadium and clean the toilets used by the Military personnel inside the stadium where were detained another inmate says.

Many of them allege that they have had a bout of Malaria fever and no proper medical facilities were available to them.

They also say they are forbid from meeting anyone expressing their difficulties and the only people to have visited us were international bodies who they allege are pressurising them to return back voluntarily.

Earlier nine people who were in Lome have returned back to Eastern Sri Lanka, who has told the BBC that there are similar people stranded in Benin and Ghana also.

According to latest reports there are 19 women and 11 children in the open detention centre and 28 people are returning back to Sri Lanka on 3rd or 4th February voluntary after the intervention of IOM, BBC reports.