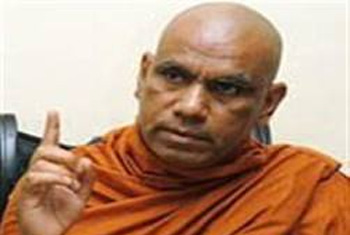 VIDEO: There is a conspiracy within the govt. against the govt. - JHU

Speaking at a press conference held today (April 24) in Colombo, he said that although the country had been liberated and that the people were enjoying peace after 30 years, Sri Lanka was still victim to international conspiracies.

Sobith Thero stated that several internal conspiracies within the government were paving the way for the efforts of foreign powers against the country, adding that the President had to stay vigilant in this situation.

He warned that the latest effort of this conspiracy was the tension caused between Buddhists and Muslims regarding the mosque that has been located within the Dambulla sacred zone.

He claimed that this was a clear sign of a Muslim invasion which has been endorsed by certain people in the government whom he claimed should be punished severely.

Thousands of Buddhist monks and lay supporters protested the construction of a mosque and a Hindu temple built within the area designated as a Buddhist sacred zone in Dambulla.

The protestors, shouted slogans and waved the Buddhist flag and marched from the Dambulla town towards the mosque located in the Kandalama Junction.

The protestors had asked the Muslim devotees to leave and had forcibly entered the mosque premises, demanding its removal.

Prime Minister D.M. Jayaratne stated that after he was appointed as the Minister of Buddha Sasana and Religious Affairs , no approval was given to construct anything within the sacred zone in Dambulla.

He added that the government will not allow any illegal construction within sacred zones around the country including Dambulla which was steeped in thousands of years of Buddhist history.

He later stated at a special discussion in Gampola that steps had been taken to immediately remove the mosque that had been built within the Rangiri Dambulla Vihara sacred zone and relocate it in an appropriate place in the area.

Governor of the Western Province, Alavi Moulana today expressed his objection towards the relocating of the mosque in Dambulla, following a protest by Buddhist monks and lay supporters last Friday.

Moulana said he had not attended the discussion held by Prime Minister D.M. Jayaratne yesterday regarding the issue and therefore had not agreed to the removal or relocating of the mosque.

The Western Province Governor says he believes the incident could be a conspiracy to direct the attention of Muslim countries elsewhere.

Senior Minister A.H.M. Fowzie stated that the government will intervene and resolve the issue in a peaceful manner instead of resorting to protests and demonstrations.

The UNP in a statement claimed that according to the sacred zone act, no religious place of worship could be erected within the premises of another while stating that a reasonable settlement must be found through peaceful discussions between the parties involved.