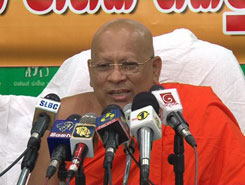 VIDEO: Even Ranil becoming Executive President is a disaster

The United Bhikkhu Front today called on the people of the country to stand together to abolish the Executive Presidential System and Provincial Council System in Sri Lanka.

Because no matter who, not just President Mahinda Rajapaksa even if its Ranil Wickramasinghe, the result will be the same. Theres no two ways about it, the Secretary of the United Bhikkhu Front, Ven. Thiniyawala Palitha Thero said.

No matter who it goes to, it will be a disaster for the country, he stressed.

The Thero also criticized the Minister of Health for overlooking the current issues plaguing the health sector and worrying about incidents which happened over 20 years ago.

Thousands of patients have perished due to dengue and the BTI bacteria is being imported to Sri Lanka for the past 2 years, however the Health Minister has no problems, he said.

Health Minister Maithripala Sirisenas biggest problem right now is Ranil Wickramasinghe passing information to former President Kumaratunga to defeat Gamini Dissanayake in the election over 20 years ago, he charged. Thats all he talks about. He has no knowledge about dengue.

He also claimed that Minister Sirisena, who is digging other peoples dirt, is employing 55 persons as his personal staff and is using 44 vehicles at state expense.

We (the United Bhikkhu Front) with great respect would like to remind the Health Minister of the Chinese saying: when you point one finger at another person, you point three fingers at yourself.


Disclaimer: All the comments will be moderated by the AD editorial. Abstain from posting comments that are obscene, defamatory or slanderous. Please avoid outside hyperlinks inside the comment and avoid typing all capitalized comments. Help us delete comments that do not follow these guidelines by flagging them(mouse over a comment and click the flag icon on the right side). Do use these forums to voice your opinions and create healthy discourse.