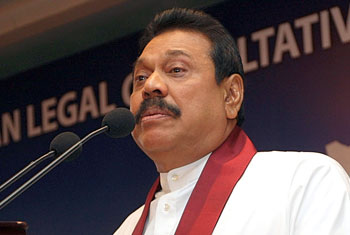 VIDEO: Impeachment against CJ was constitutional-President

President Mahinda Rajapaksa today defended the governments move to impeach the countrys Chief Justice, saying they had proceeded with it constitutionally and also termed it as the completion of another obstacle.

He stated that government is faced with various obstacles and that one such obstacle was completed yesterday.

The impeachment motion against Chief Justice Dr. Shirani Bandaranayake was passed with a two thirds majority in Parliament last night.

However, various conspiracies have already been set in motion, he stressed.

The court premises have not been used for political activities in the past, however now it has become a picketing roundabout, he said during a ceremony at the Sugathadasa Stadium this morning to handover letters of appointment to 52,000 graduates.