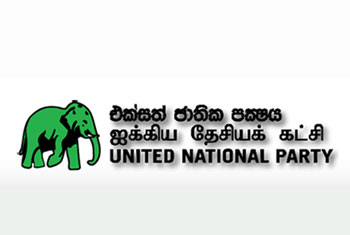 The Working Committee of the United National Party (UNP) today re-appointed Joseph Michael Perera and Daya Gamage as Assistant Leader and National Organizer respectively while the appointment of the Deputy Leader has been postponed, the partys General Secretary Tissa Attanayake said.
It is said that the Working Committee, which gathered today under the leadership of Opposition Leader Ranil Wickramasinghe, had not reached a decision regarding the re-appointing of Sajith Premadasa as the Deputy Leader.
Internal sources say that the reason for this is due to the Hambantota District MP speaking in Parliament without approval of the party or the leadership, taking up the time allocated for the TNA during the debate on the impeachment motion.
Party Leader Ranil Wickramasinghe, who is vested with the power to appoint any member to key posts  under new party constitution, had recently appointed Tissa Attanayake as General Secretary, Gamini Jayawickrama Perera as Chairman and Senarath Kapukotuwa as Treasurer.
Disclaimer: All the comments will be moderated by the AD editorial. Abstain from posting comments that are obscene, defamatory or slanderous. Please avoid outside hyperlinks inside the comment and avoid typing all capitalized comments. Help us delete comments that do not follow these guidelines by flagging them(mouse over a comment and click the flag icon on the right side). Do use these forums to voice your opinions and create healthy discourse.