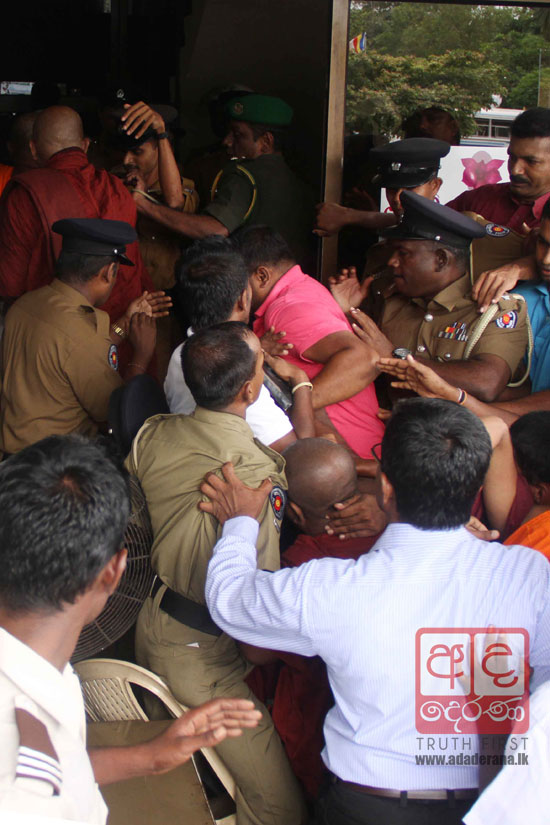 Members of the Sinhala Ravaya Buddhist group attempt to storm into the funeral parlour in Borella, where the remains of Ven. Bowatte Indrarathana Thera were placed. Pic by - Sanjeewa Lasantha

A conflict of opinion between two Buddhist monk groups resulted in a heated exchange of words near a private funeral parlour in Borella today with the announcement that the remains of Ven. Bowatte Indrarathana Thera, who committed self-immolation, is to be taken to Kahawatta in Ratnapura.

Western Province Senior DIG Anura Senanayake had also arrived at the location and attempted to intervene and resolve the situation, which developed at around 10.45 a.m. today.

However, he was unsuccessful as the argument between the two groups of Buddhist monks continues to rage on, Ada Derana reporter said.

The remains of Indrarathana Thera, who succumbed to injuries at the Colombo National Hospital last night, was taken to the Colombo Medical College for postmortem examination.

It has been reported that certain Buddhist nationalist organizations prefer the last rites of the Thera to be performed in Colombo.

He doused himself with a flammable liquid and set himself ablaze near the main entrance at the Dalada Maligawa in Kandy on Friday (24) to protest against the slaughter of cattle among other issues.

Policemen and devotees near the temple doused the flames and rushed the monk to the Kandy Hospital. He was later airlifted and transferred to the Colombo National Hospital, where he succumbed to injuries last night.