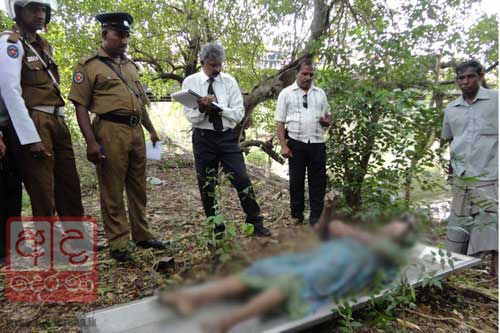 -
The body of an elderly woman, who had died under suspicious circumstances, was recovered from the Lunu Oya in Chilaw this morning, according to information provided by a resident of the area.

The deceased has been identified by relatives as K.D. Theresahami, 85, a resident of Sangathattana, Chilaw.

The magistrates inquiry was carried out by Chilaw Acting Magistrate Nissanka Nanayakkara, who instructed the judicial medical officer at the Chilaw Hospital to conduct the postmortem examination.

Police said that although the woman has children and grandchildren, she does not live with them and that she constantly engages in arguments with family members as well as with neighbors.

It is reported that the body was discovered with certain injuries inflicted to the head, and that police are conducting investigations to determine whether it was a suicide or a possible murder.