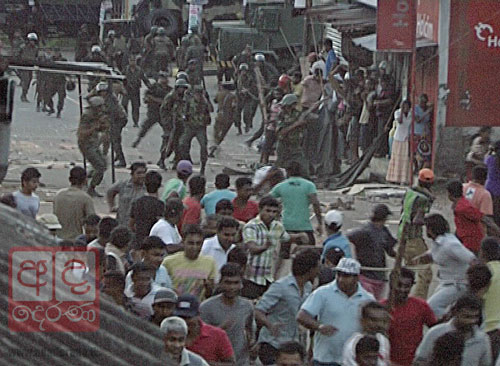 Army personnel clash with protesters in Weliweriya on August 01

A 19 year old male has succumbed to injuries while being treated at the ICU of the Colombo National Hospital following the clash in Weliweriya, a spokesman for the hospital said.

The youth has passed away last night bringing the death toll from the clash, between protestors and security forces personnel on Thursday, to two as a 17 year old student had died from injuries on the same day.

Three more persons are said to be receiving treatment in the Intensive Care Unit (ICU) with critical injuries sustained from the clash while several others are still being treated at the Colombo National Hospital, Ragama and Wathupitiwala hospitals.

Meanwhile the OIC of the Weliweriya Police Station who was also injured has been transferred to the Police Hospital, a hospital spokesman said.

The last rites of the 17-year-old K.A.D. Akila Dinesh, who was killed in clash which broke out on August 01, is to be conducted at the Weliweriya Public Cemetery today (4).

Various parties have accused the military of using live rounds to disperse the protesters who had demanded clean drinking water.