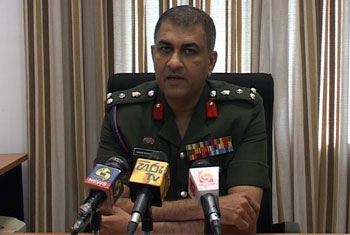 VIDEO: Some tried to fish in troubled waters at Weliweriya  military spokesman

Responding to the accusations against security forces personnel regarding the clash in Weliweriya, Military Spokesman Brigadier Ruwan Wanigasooriya today said that the army was not there to create problems but to resolve the crisis and reopen the road blocked by protesters.

Refusing to disclose who had issued the order to open fire at the protest demanding clean drinking water, he stated that the inquiry into the incident in still ongoing and that a statement can be made on the matter after it is completed.

He state that the inquiry report on the incident will be handed over to the Commander of the Army within 2 weeks.

However, when questioned whether the army will be used during similar instances in the future, Wanigasooriya said that he cannot predict the future.

He stated that a certain group had attempted to fish in troubled waters during the Weliweriya incident and that the army was called into resolve the crisis and re-open the blocked road, not create problems.

On accusations of army personnel assaulting journalists covering the incident, the military spokesman said that the army values the services rendered by the journalists, who had even provided the army with great assistance during the final stages of the war.

While it is not appropriate to make presumptions regarding the Weliweriya incident, if any wrong had been committed those responsible will be punished according to military law, Brigadier Ruwan Wanigasooriya told reporters today.