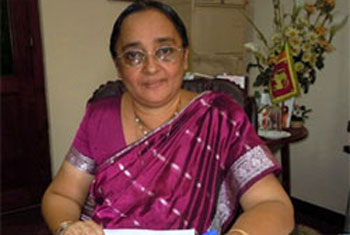 The Chairperson of the University Grants Commission, Prof. Kshanika Hirimburegama

The University Grants Commission says it will take stern action against four Sri Lankan university lecturers who are reported to have participated in an alleged pro-Eelam conference in London organized by the Transnational Government of Tamil Eelam (TGTE).

The Chairperson of the University Grants Commission, Prof. Kshanika Hirimburegama said that an extensive investigations will be carried out regarding the purported participation of these lecturers in the pro-Eelam gathering as they had obtained leave by claiming that were to attend a Tamil Language seminar abroad.

If they are found to have participated in an anti-Sri Lankan gathering stern disciplinary action will be taken against them, she was quoted saying by the Government Information Department.

Prof. Hirimburegama said that these lecturers who have gained their current status through the free education provided by the Sri Lankan state and acting against the very state that helped them to acquire prominent positions in the academic field cannot be accepted under any circumstances.

The three professors who have participated in this anti Sri Lanka gathering are from the Universities of Jaffna, Sabaragamuwa and Uva Wellassa.

The Chief of Defence Staff General Jagath Jayasuriya addressing media personnel at the CDS office at the BMICH premises on Wednesday said that four senior professors have left the country to participate in a program organized by the Transitional Government of Tamil Eelam in England, under the guise of carrying out a research study.

He said that the Intelligence officials tabled a report in this regard to the Security Council which met under the patronage of President Mahinda Rajapaksa.