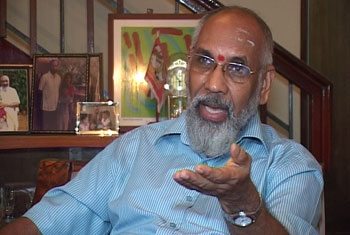 Govt has not fulfilled any of its promises - Vigneswaran

Chief Minister C. V. Vigneswaran says that the government has not fulfilled any of its promises to the Northern Provincial Council and that even calls to scale down troops in the war-torn province have gone unheard.

We were promised many things but in the end we have received nothing, he said in an interview with the BBC Sinhala Service.

Vigneswaran further said that he does not see any wrong in calling for an international probe into allegation of war crimes during the final stages of the war, as there is no domestic process to investigate the allegations.

He stated that the people in the Northern Province have lost many of their family members during the war. The people who came out of there know what happened there.

Instead of completely investigating the final stages of the war and finding out what actually had taken place, the government is saying that there is no need for an investigation and that they trust their soldiers, he said.

He says that the people in the North have the right to find out what happened to their relatives.

The truth needs to be revealed. If any person has committed a wrongdoing then they should be punished, he said, adding that you reap what you sow.

The Chief Minister stated that the request made from the government to withdraw troops from the North has also not been fulfilled and that the President and the Presidents Secretary are issuing contradictory statements regarding the number of soldiers currently station in the province.