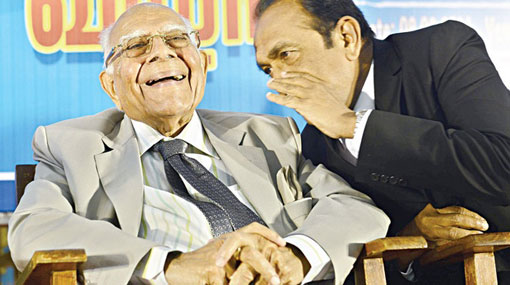 LTTE created by Indira Gandhi for protection of Indian interests

Indias former Union Law Minister and advocate Ram Jethmalani has said that the Liberation Tigers of Tamil Eelam (LTTE) was created by former Prime Minister Indira Gandhi for the protection of Indian interests.
Jethmalani also hit out at the India-Sri Lanka peace accord signed in 1987 stating that it was the great betrayal of Indian interest.
He said LTTE was created by former Prime Minister Indira Gandhi for the protection of Indian interests.
They were trained by our own agency RAW. When the Chinese and the Pakistanis were establishing their power in Sri Lanka, Indira wanted some force inside Sri Lanka to safeguard our Indian interests, he was quoted as saying by Indian media.
He also took a dig at Rajiv Gandhi blaming him of betraying Indian interest in the past.
He soon enough got involved in Bofors. And, it is the Bofors phase of his life that made him enter into a pact with Sri Lanka with a very fox-like politician called Jayawardene (former Sri Lankan President, Junius Richard Jayawardene) and I think that Indo-Ceylon pact that he entered into was a great betrayal of Indian interest. And, those who were treated as state guests and given training and money, they were exposed to be killed by Indian army which was sent to Sri Lanka. It certainly was betrayal and a case of great provocation, though within the meaning of penal code, it cannot be called grave and sudden provocation, he said.
Hailing Tamil Nadu Chief Minister J. Jayalalithaa for taking the right decision to release former Prime Minister Rajiv Gandhis assassins, Jethmalani, opposing death sentence, said that delay exceeding two years in the execution of death sentence should be considered sufficient to invoke Article 21 and demand quashing of the sentence.
Speaking at a function where he was felicitated by MDMK chief Vaiko for saving the assassins from the gallows, Jethmalani complimented the Chief Minister for her decision to release the seven convicts and hoped she would stick to her decision. Hitting out at Congress for opposing the release of the convicts, he said some sycophants in Congress opposed the move for electoral gains.
Talking about Santhan, Murugan and Perarivalan, he said the trio had been living in the shadow of the noose for over 23 years. It was like undergoing 15 life sentences, Jethmalani said.
Quoting Justice O Chinappa Reddy, he said the judge in his verdict 50 years ago stated that any delay in carrying out the death sentence beyond two years should be considered sufficient to entitle the person under sentence of death to invoke Article 21.
Justice Sadasivam just did what Justice Chinappa Reddy did 50 years ago, Jethmalani said hailing the judgement.
Jethmalani said he opposed death penalty and quoted British philosopher of law Jeremy Bentham that human justice is fallible.
He said the courts should not inflict sentences that are irrevocable and he is for the abolition of death sentence.
Jethmalani had appeared for the defence of three convicts in the Rajiv Gandhi assassination case, Santhan, Murugan and Perarivalan, in their plea against death sentence.
On Thursday the Supreme Court postponed the hearing on the Centres plea against the Tamil Nadu Governments decision to release seven prisoners convicted in Rajiv Gandhi assassination case till March 26.
- With inputs from ENS/ANI
Disclaimer: All the comments will be moderated by the AD editorial. Abstain from posting comments that are obscene, defamatory or slanderous. Please avoid outside hyperlinks inside the comment and avoid typing all capitalized comments. Help us delete comments that do not follow these guidelines by flagging them(mouse over a comment and click the flag icon on the right side). Do use these forums to voice your opinions and create healthy discourse.