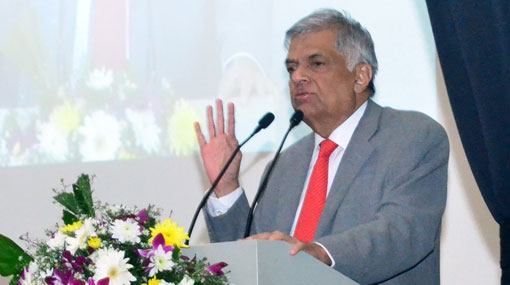 Prime Minister Ranil Wickremesinghe today said that he thinks that establishing a ‘hybrid Supreme Court’ to probe the allegations of human rights violations during the conflict with the LTTE, is not practical.

“What we have done in the last two years is to correct the position and we are now negotiating a rollover for the next two years so that we could take the remaining actions.”

“In that case we have to take those remedial actions in the coming two years,” he said, speaking during an event organized by the Bar Association in view of National Law Week 2017.

“While we know what is happening today, I don’t know whether it has really gone out into those countries.”

“We can see certainly the independence is no longer an issue. The law’s delays, maybe.”

He stated that those are issues that we have to handle because if you have any criminal proceedings, it can’t be long drawn out and it has to be fast, day-to-day and the appeals have to be disposed of, “otherwise each case will be a political issue.”

The other one is the question of hybrid court, he said. “Now is a hybrid court necessary? We have independence. But more than that my issue is can you actually establish a hybrid Supreme Court?”

“If you bring in an amendment to have a hybrid Supreme Court is the two-thirds majority sufficient or are you on the borderline that you can even rule that there is a referendum necessary?”

“Now the European Union itself knows the dangers of a referendum. If you go for a referendum everything is a loss.”

“So we have to really rethink it. That is what I’ve told the High Commissioner also,” Wickremesinghe said.

“If the court rules that a referendum is necessary we are going to be in serious trouble.”

“That’s not an issue which you can campaign and hope to win,” the PM added.

“So what is the option that we can give? Let’s look at the options and giving because I think a hybrid Supreme Court is certainly not practical.”