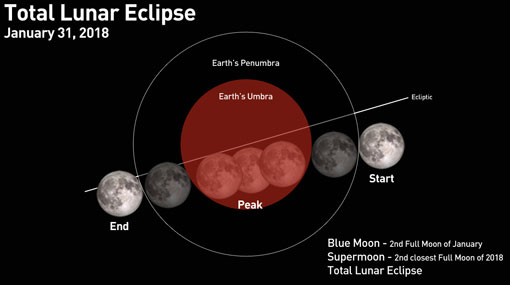 For the first time since 1866, three lunar events will coincides on the same day – A blood moon total lunar eclipse, a super moon and a blue moon will be visible to us on 31st January 2018 at the moon rise in the eastern horizon after 6.15 p.m.

When two full moons fall on the same month the second full moon is called the blue moon. This is just a name and the moon does not appear in blue colour.

Size and brightness of the full moons on poya days vary slightly from month to month because of the non-circular but elliptical shape of the Moon’s orbit around the Earth with closest distance of Moon to the Earth (“perigee”) is about 50,000 km closer than the furthest distance  (“apogee”). On January 31st , at perigee, the moon lies only 358,995 km away from the Earth. As a result  the moon will appear  14% bigger and 30% brighter than some of the full moons that we have seen in the past. A similar evnt occurred on 2018 January 1st full moon day too.

The following  illustration   shows the orbit of the moon around the earth and the idea of perigee and the appearance of moon at the Perigee and Apogee.

When a Full Moon takes place while the Moon is near its closest approach to Earth, it is called a Super Full Moon or a Supermoon.  A Micromoon, on the other hand, is when a Full or a New Moon is near its farthest point from Earth, around apogee. It’s also known as a Minimoon, and in this year the smallest full moon is due on July 27th 2018 and there will a total lunar eclipse on that day too.

There will be a total lunar eclipse too on the same day visible to Sri Lanka with the moon rising from the eastern horizon around 6.15 p.m. The eclipse begins at 4.21 p.m. Sri Lanka Standard Time and will end up at 9.38 p.m on January 31st, 2018.  Since beginning of the eclipse occurs  during day time for Sri Lanka only the latter part of this eclipse is visible to us after sunset.

A total lunar eclipse is sometimes called a Blood Moon, because of the reddish colour of  the Full Moon takes on when fully eclipsed. As the Sun’s rays pass through the earth’s atmosphere, some colors in the light spectrum are filtered out due to scattering.   Red wavelengths are least affected by this effect, so the light reaching the Moon’s surface has a reddish hue, causing the fully eclipsed Moon to take on a red color.

There will be somewhat high tide on this day due to the closeness of the moon but no earthquakes or other natural disasters has reported in the past on similar occasions, though there are rumors spreading about onset of natural disasters like earthquakes, tsunamis, cyclones said Prof. Jayaratne.