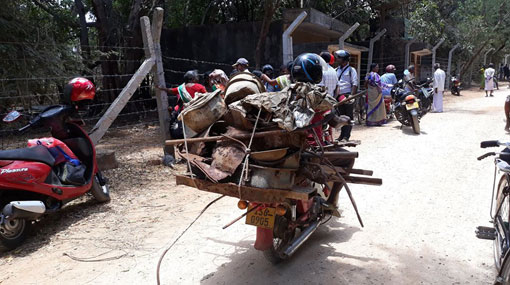 Timber and metal stolen from lands released in Walikamam

Tellippalai Police has received several complaints from landowners regarding an alleged organized group stealing timber and metal from the lands recently released by the army.

Although 683 acres of land in Walikamam and other areas were released to their lega owners recently, they still live in refugee camps and other places.

The Divisional Secretariat received complaints from residents in the area that with the lands being recently vacated after being occupied by the Army for so long, an organized group is stealing timber and metal left behind at the houses and lands.

Reportedly, several machinery left behind during the war time have now eroded and are being stolen for scrap metal.

The District Secretary has informed the police and Grama Niladharis that only landowners have permission to enter the lands and notices regarding the matter have been posted in the surrounding premises.