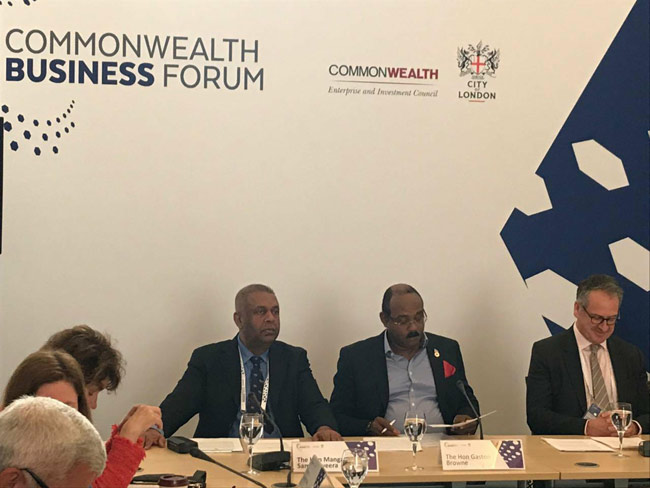 Finance Minister Mangala Smaraweera says that Sri Lanka has long identified the risk of financial crime as a priority area, given the country’s history in battling a sophisticated terror organization, and that the laws and regulations aimed at preventing financial crimes need to be updated as the financial system develops.

The minister attended a roundtable discussion on ‘Financial Regulation: Working Together to Address De-Risking,’ held on the sidelines of CHOGM 2018 in London, on Tuesday (17).

He stated that as the dynamics of the finance industry and technology constantly evolve, it is essential that financial regulations remain one step ahead. The sophistication of financial crimes has increased exponentially in recent years and is a threat to all nations, be it developing or developed nations. This has resulted in a number of negative fallouts for international finance, he said.

One such negative fall-out is “de-risking”, the scenario of global banks selectively withdrawing from the business of correspondent banking, he said, adding, that this can have highly detrimental implications for banks in developing countries in particular as it can shut them out of the global financial architecture.

“Sri Lanka has long identified the risk of financial crime as a priority area, given the country’s history in battling a sophisticated terror organization.”

He stated that since November 2017, the Sri Lankan government has taken a number of measures to enhance Anti Money Laundering compliance such as introducing amendments to the Trust Ordinance, Companies Act, enactment of the Proceeds of Crimes Act, enhancing Customer Due Diligence Rules, and regulations on targeted financial sanctions on proliferation.

“The challenge for countries like Sri Lanka is how to ensure continued progress of financial inclusion in this context.”

Samaraweera said at a more micro-level, one of the major objectives of the government, embodied in the 2018 Budget themed ‘Enterprise Sri Lanka’, is to empower entrepreneurs by providing access to finance. In order to ensure access to finance at grass roots level, it is important for the Sri Lankan financial system to have robust access and engagement with the global financial architecture, he pointed out.

“As the financial system develops, the laws and regulations aimed at preventing financial crimes need to be updated. Sri Lanka very well understands this reality and is taking every necessary measure to keep abreast of the regulatory developments.”