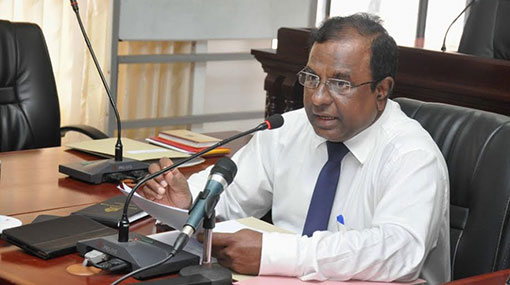 Sports Minister Faiszer Musthapha has appointed the Secretary to the ministry H.T. Kamal Padmasiri as the competent authority of Sri Lanka Cricket (SLC), until elections are held.

Addressing a media briefing in Colombo, he said that Padmasiri was appointed to oversee the affairs of sports body until elections are held.

“This is a temporary arrangement. This is until an election is held. According to the powers vested on me from the Sports Law Section 41, I have decided to appoint a competent authority,” the minister said, adding that his decision was based on the advice of the Attorney General.

Sri Lanka Cricket elections which was scheduled to be held today (31) was postponed indefinitely after the Court of Appeal yesterday issued a stay order preventing the SLC election from being held until June 14.

This was following a petition submitted by former SLC Secretary Nishantha Ranatunga, who is also contesting for the Presidency this year, seeking a court order preventing Thilanga Sumathipala from contesting the election.

Sri Lanka Cricket yesterday announced the indefinite postponement of SLC’s Annual General Meeting (AGM) and the cancellation of the Extraordinary General Meeting (EGM), which was planned to be held today (31), following the ‘Stay Order’ given by the Court of Appeal.