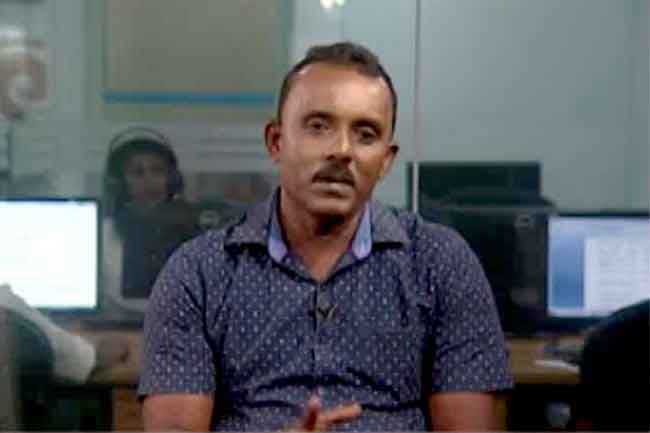 Police Sergeant Sanath Gunawardena holding Police ID number 4925 was a topic of controversy due to an incident of arresting a lorry which illegally transported sand.

Sanath Gunawadena commenced his police career on 10th January 1989 from Bambalapitiya Police Station and has been in the service for nearly 30 years.

In June 1990 he is captured by the LTTE terrorist organization while he was on duty in Oddusuddan area in the Northern Province. He was in captive of the LTTE for 4 years where he suffered through torture.

In 1995, he was serving in the Kalutara Police division, when he had to face another challenge in his career. This was regarding a death as a result of a police shooting in Aluthkade area which he says was ordered by Divisional Superintendant of Police (SP) Chandra Perera.

However, the said SP had claimed before the court that he had not given out any such order, denying Gunawardena any promotions or salary increase for his 26 years of service.

His current basic salary is Rs 25,000 while the other officers who work alongside him receive a basic salary of Rs 45,000, Gunawardena stated to Ada Derana.

According to him, the attorneys’ fees for the court case of the Thebuwana incident costs him Rs 13,000 per session.

The recent controversial incident occurs when he was serving attached to the Thebuwana Police Station, on 29th September. At around 4.30 am that morning, Sergeant Gunawardena arrests a lorry which had been transporting sand without a permit.

However, the relevant lorry had been released without any inquiry and Gunawardena was rebuked by a higher official regarding the arrest, despite there being clear evidence on that the lorry had been transporting sand illegally.

This led to Sergeant Gunawardena expressing his protest over the incident by arriving at the Thebuwana junction along with the T56 assault rifle and refused to budge from spot.

After more than 2 hours the Special Task Force (STF) personnel managed to apprehend the Sergeant while the firearm in his hand fired several times during this operation to subdue him, although no one was harmed.

Police Sergeant Sanath Gunawardena was interdicted and remanded on the charges that he had behaved in an unruly manner while armed with his service weapon.

When tried to prove his innocence, Gunawardena was accused of a mental illness by the police Department.

As this incident was blown out by media, it gained the attention of President Maithripala Sirisena as well. President Sirisena granted Rs 1 million to the Sergeant following a meeting held with Sergeant Gunawardena, yesterday (16). This was considering the financial difficulties faced by him due to the temporarily suspension of his service as well as an assistance for the education of his children.

Meanwhile, Sergeant Gunawardena was reinstated to his post by the order of Inspector General of Police Pujith Jayasundara.

However, he had not officially received the appointment as of yet, he said to Ada Derana.

Although this happened due to his luck, he doesn’t approve of his behavior which happened in an outburst of anger, he stated. However, he will not be afraid to properly fulfill his duties, Sergeant Sanath Gunawardena told Ada Derana.