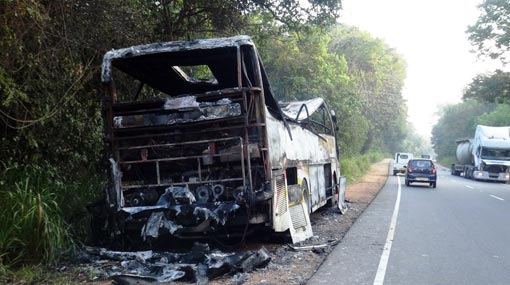 A bus has been completely destroyed after it spontaneously burst into flames in Digampatana area on the Dambulla-Habarana road, early this morning (08), stated Ada Derana reporter.

The bus had been on its way to Oddamavadi in Batticaloa after being repaired at a garage in Kurunegala when it spontaneously combusted, according to the bus owner.

Reportedly, the driver of another vehicle on the road had informed the bus driver that the back of the bus had caught on fire. The driver of the bus says that he had then parked the bus on the side of the road and after several minutes large flames of fire erupted from the bus.

According to the Sigiriya Police, the destroyed bus had been a luxury bus worth over Rs 8 million.

However, the police are conducting investigations to determine whether the fire was caused by a technical malfunction or some other factor.