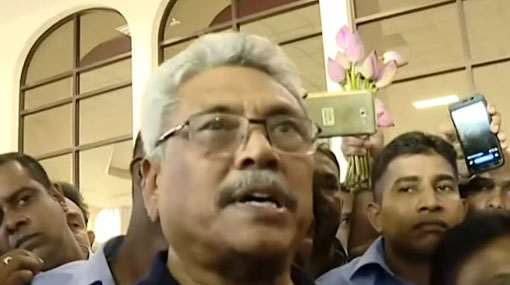 Former Defence Secretary Gotabaya Rajapaksa says all necessary steps have been successfully concluded to renounce his US citizenship.

He made these comments upon his arrival in Sri Lanka this morning (12) following his personal visit to the United States.

Reportedly, a huge crowd had gathered at the Bandaranaike International Airport to welcome the former Defence Secretary.

Gotabaya Rajapaksa made a three-week personal visit to the US to complete the necessary measures regarding the renouncement of his American citizenship.

He received local media attention as two lawsuits were filed against him at a US court during his visit.

Further speaking to the media, he said the lawsuits were against him alleging that he is responsible for the arrest of two individuals including a media person and that he should pay compensation for this.

According to the law in the United States, a private institute has to issue notices in this regard, however, anything as such has not taken place, Gotabaya commented further.

Gotabaya added that his lawyers in the US are currently in working on voiding these two lawsuits.

These lawsuits were filed targeting the upcoming elections and the Diasporas that underpin LTTE, and certain Sri Lankans have supported these lawsuits, he commented. Gotabaya said even the Office of Consulate General in California has steered the filing of these lawsuits.

Sri Lankans as well as Americans, however, had rendered massive support for him in this regard, Gotabaya said addressing the media.

Gotabaya further said that levelling such allegations against him has downgraded the entire country and all his service rendered as the former Defence Secretary.

A non-governmental organization called the International Organization of Truth and Justice Project, issuing a press release April 8th, stated that their organization and a private legal office in the US had taken steps to file a civil lawsuit against Gotabaya Rajapaksa at a court in California.