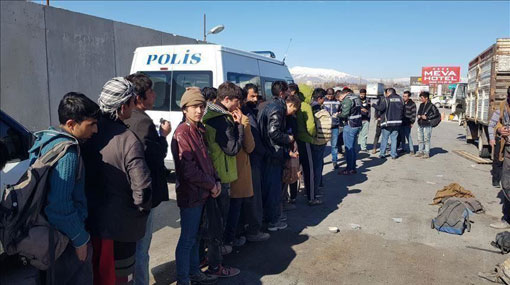 A total of 558 irregular migrants including Sri Lankan nationals were held across Turkey on Friday, foreign media reported.

Security personnel spotted groups of migrants in western Edirne province who were attempting to cross to Europe, according to Turkish security sources.

The migrants are from Pakistan, Sri Lanka, Bangladesh, Morocco, Tunisia, Iran, Iraq, Palestine, Egypt and Syria, the sources was quoted as saying by Anadolu Agency.

In western Kirklareli province, 15 Afghan nationals who were trying to go abroad using illegal routes were held, the sources added.

Turkey has been the main route for refugees trying to cross to Europe, especially since the beginning of the civil war in Syria.

Some 268,000 irregular migrants were held in Turkey in 2018, according to the Interior Ministry.