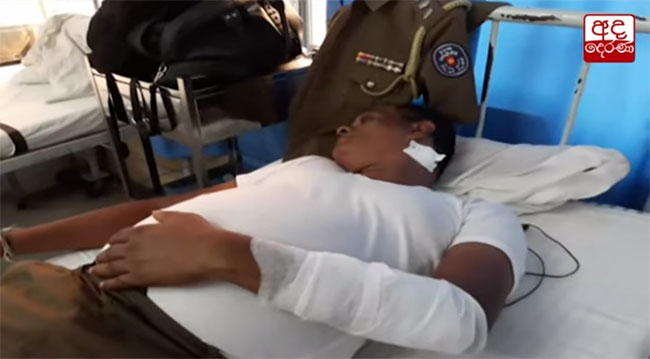 The officer-in-charge (OIC) of the 119 Police Emergency Center has been admitted to the Colombo South Teaching Hospital after allegedly being assaulted by a high-ranking police officer.

OIC of the 119 Emergency Service, Chief Inspector S.A. Jayatillake, claims that he was assaulted by the Director of the IG’s Command Police Information Division.

He says that the incident had taken place at around 12.30 p.m. yesterday (18) at the office of the IG’s Command Police Information Division in Mirihana, which also houses the 119 Police Emergency Center.

The OIC, who is receiving treatment at the hospital for minor injuries to his hand and neck, says that the Director of the IG’s Command Information Division SP Amith Gunaratne and two other police officers had assaulted him after verbally abusing him.

He said that the attack was carried out over some personal dispute which he was not aware of and that he had recorded the audio of the high-ranking police officer using abusive language on him and threatening him.

However, when inquired by Ada Derana regarding the accusations, the Director of the IG’s Command Police Information Division said that no such attack had taken place.

Police Spokesman SP Ruwan Gunasekara said the officer in question has been discharged from the hospital today and that two police officers attached to the IG’s Command Police Information Division have lodged a complaint against this OIC accusing him of threatening to kill them.

He said that the complaints from both sides are being investigated.