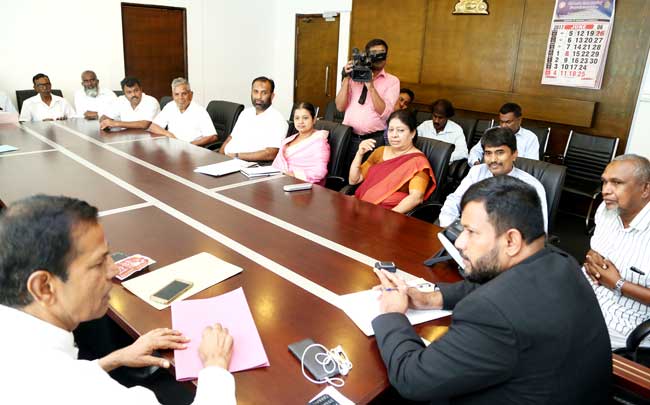 Bathiudeen responds to accusations of links with terrorists

He stated this speaking on the Easter Day attack and its aftermath at the parliament today (24).

In June 2017, I met with Ibrahim Hajiar (YM Ibrahim, the Chairman of Colombo Traders’ Association-CTA) along with CTA representatives at my office in the Ministry on certain issues in supply which were officially submitted to me.”

However, Bathiudeen says that a parliamentarian publicly accused him of having personal links referring to a photo taken at this meeting.

“I strongly condemn such false accusations. Sadly, the people, such as me, who had always opposed terrorism are now accused of having links with terrorists”, said Minister Bathiudeen.

The Minister added that there could be no political campaign worse or cheaper than accusing him of terrorist links over a photo of an official meeting.

“The global terrorism which affected even developed countries such as the United States has now arrived in Sri Lanka. This is not a time for such talk”, he said.

Bathiudeen also mentioned that the Muslim community in Sri Lanka has already condemned this act of terror.

According to him, there are accusations against a “certain MP” who had defied the law and influenced the release of some individuals who had been arrested over the “Wanathavilluwa incident”. Despite making allegations, no one has clearly named this politician, pointed out the Minister.

“I demand to know the identity of this politician. Who was this? Please reveal it to us. I sincerely urge everyone not to make wild allegations such as these, which puts persons like me in a difficult situation”, further said the Minister.

The release issued by the Ministry stated that, on the 1st of June in 2017, the Colombo Traders’ Association (CTA) officially held a meeting with Minister Rishad Bathiudeen regarding an issue with Maximum Retail Prices (MRP) of goods and several other issues.