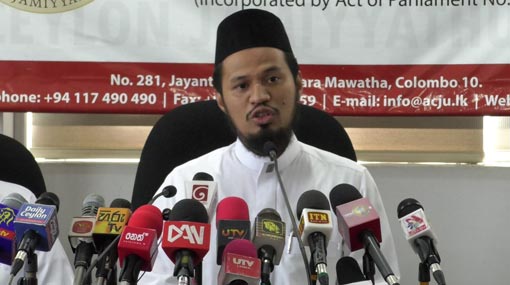 SL Muslims will not accept bodies of terrorists behind attacks - ACJU

All Ceylon Jamiyyathul Ulama (ACJU) stated that they will not accept the bodies of the individuals who carried out the Easter Day attacks.

Holding a press conference today (25), Sri Lanka’s main Islamic Cleric association stated that they vehemently condemn these attacks and that those who are responsible for this attack must be brought before the law and given maximum punishment.

The ACJU states that there is no place for terrorism in Islam and that the Muslims of Sri Lanka condemns all forms of violence, extremism, and terrorism. They stated that they clearly wish to emphasize that in the history of Sri Lankan Muslims nobody has ever partaken in such a violent act.

ACJU declared, “Those who committed this barbaric attack on innocent civilians do not belong to us. Hence we categorically state that we will not accept their bodies. They have not done any good on behalf of us.”

Considering the situation of emergency and the security of the country, we request all our sisters to cooperate and identify themselves and remove their face veil whenever it is necessary. Do not create any situation where others will feel threatened. We request them to carry their identification and corporate with the security officials.”

The ACJU pointed out that the ACJU and the Muslim organizations under ACJU issued a joint declaration against the ISIS on 22nd July 2015. It should be noted that since the declaration was made the ACJU and other Muslim organizations have been continuously informing the defense authorities and requested them to take necessary actions against the individuals who hold extremist ideologies, stated ACJU.

The ACJU stated that the Eastern Muslim community had alerted the police on one of the individuals behind the attacks. They even have gone to the extent of holding protests demanding the arrest of the person, said ACJU.

They will be writing to the Archbishop Cardinal Malcolm Ranjith with this regard, they further said.