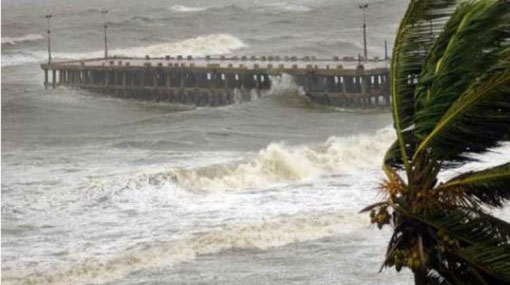 Depression in Bay of Bengal likely to intensify into cyclonic storm

The low pressure area over southeast Bay of Bengal to the southeast of Sri Lanka has now concentrated into a depression and is located about 1050 km Southeast of Pottuvil, the Meteorology Department said.

It is likely to intensify into a deep depression during next 24 hours.

It is very likely to move northwestwards along and the system is likely to intensify further into a cyclonic storm while moving closer to the Eastern coast of Sri Lanka.

The general public, naval and fishing communities are requested to be attentive about future advisories issued by the Department of Meteorology in this regards.

Showers or thundershowers will occur in Sabaragamuwa, Central, Southern, Uva, Western and North-western provinces after 2.00 p.m. while fairly heavy rainfall about 75 mm can be expected at some places.

Showers may occur in the Northern and Eastern coastal areas in the morning too.

Winds will be North-easterly in the sea area extending from Kankasanturai to Hambantota via Trincomalee and Batticaloa and winds will be South-westerly to Westerly in direction in the other sea areas around the island.

Wind speed will be 15-30 kmph in the sea areas around the island.