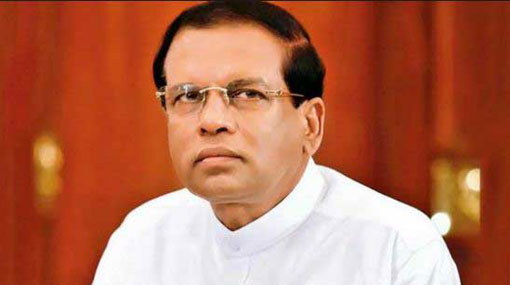 President Maithripala Sirisena says that the Inspector General of Police and the Defence Secretary have not fulfilled their responsibilities.

The President blamed the security officials for not warning him of terrorist threats and said the prosecution of military intelligence officers after the war left the country vulnerable to attack.

The President, addressing the Heads of media institutes today (26), stated that he believes the IGP would resign today.

Addressing the heads of media organisations today (26), President Sirisena said that he did not receive important intelligence, and blamed the defense secretary, Hemasiri Fernando, and the inspector general of the police, Pujith Jayasundara, along with several senior police officials.

Mr. Fernando stepped down Thursday, and the president said he believed Mr. Jayasundara would on Friday.

He said security forces were carrying out widespread arrests, with more than 70 people being held so far.

He said he believed there were as many as 140 supporters of the Islamic State in Sri Lanka and that all of them will be arrested and IS wiped out from the island.

The President also said that his campaign against illegal drugs might have been a factor in the attacks because of the connections between drug gangs and terrorism.

The President urged all Sri Lankans not to look at the entire Muslim community as terrorists.

The government bears responsibility for the attacks and for weakening the intelligence services int he country, President Sirisena said.