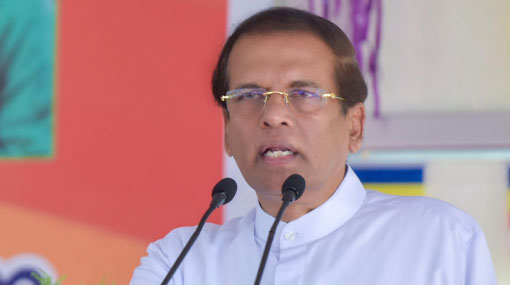 President Maithripala Sirisena has said that he would work with a great commitment to change the social conditions which cause the background for the increase of criminal activities.

The President has made these remarks addressing a ceremony held at the ground of the Welikada Prison to grant Presidential Pardon for 762 inmates in view of the Vesak Poya Day, yesterday (18).

This is the first time that a President of the country participated on such occasion and took steps to listen to the inmates, the President’s Media Division (PMD) said.

President Sirisena has further emphasized that he does not wish to see the released inmates again in prison and that he is ready to provide every possible assistance to rebuild their future. Accordingly, the President has instructed the Commissioner General of Prisons to submit a report forthwith on the number of inmates, who are willing to do self-employment and the facilities they require.

The President always pays his attention to offer facilities for rehabilitation to the inmates and to build them as law-abiding citizens, the PMD said. On January 08, 2016, the President has taken steps to release a person convicted by the courts, for plotting to kill him, the PMD added. Further speaking, the President has stated that his aim is to not to fill the prisons, but to build all the citizens as better persons and to change the social background which causes to increase the criminal activities in the country, according to the PMD.

Speaking on his views regarding the programmes implemented by the government to provide vocational training for inmates and to utilize their labour productively, President Sirisena recalled his past experiences as an inmate and appealed to utilize the time period they spend as inmates to improve their knowledge and skills.

The President subsequently handed over self- employment equipment to five inmates who were released yesterday (18).

Meanwhile, the President also heeded to a request made by an inmate by the name Lakmina Indika Bamunusinghe. He has completed his Master’s Degree while he was in prison and is currently studying at the University of Kelaniya for his doctorate. Bamunusinghe won the Sri Lankan Boxing championship in 2005 and he is expected to participate in the National Boxing Championship this year. He requested the President to provide financial assistance to complete his thesis and an opportunity to take part in the competition. President Sirisena has agreed to provide the necessary money needed to complete the thesis and instructed Minister of Justice and Prison Reforms Thalatha Atukorale to look into the Bamunusinghe’s request and to do the needful.

Ministers and parliamentarians, Secretary to the President Udaya R Seneviratne and were also present on this occasion.

The President also declared open the Vesak ‘Bath Dansala’ organized by the Buddhist Association of the Prison Department.