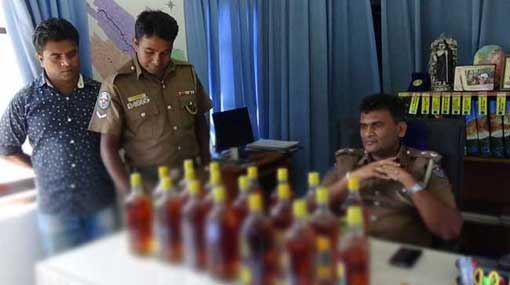 Two suspects without valid licenses have been arrested at Watawala and Bogawantalawa areas, for selling liquor during the Vesak season.

One of the two suspects was arrested early this morning (19) at a Weli Oya estate in Watawala police division along with 21 liquor bottles, Ada Derana correspondent said.

He has been released on police bail, however, he will be produced before the Hatton Magistrate’s Court, according to the OIC of Watawala police station.

Meanwhile, the other suspect was arrested by Bogawantalawa Police last evening (18) had been in possession of 10 liquor bottles at the time of the arrest. He had attempted to sell the liquor bottles for higher prices.

He was also released on police bail, however, the OIC of Bogawantalawa police station said the suspect will be produced before the Hatton Magistrate’s Court.

On May 16th, the Department of Excise announced that all liquor shops across the country should be closed for four days starting from 17th to 20th of May. The department further stated that legal action will be taken against those who manufacture, transport, possess and trade liquor during Vesak season.