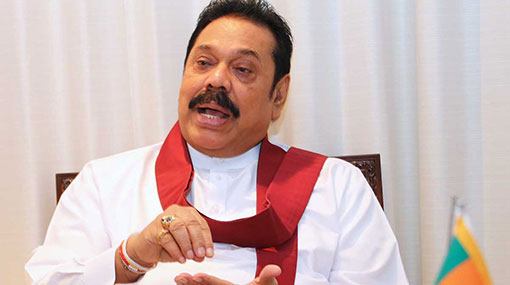 No war crimes were committed during last phase of war - Mahinda

FBI officially designated the LTTE as the deadliest terrorist organisation in the world in January 2008 and such was the nature of the terrorism that was conclusively brought to an end on the 19th May 2009 with the confirmation that its leader Velupillai Prabhakaran was dead, says Opposition Leader Mahinda Rajapaksa.

The Opposition Leader stated this delivering a speech at his official residence on Wijerama Mawatha to mark the tenth anniversary of the defeat of the LTTE today (19).

“This was not a victory that was easily obtained. The number of armed forces personnel and officers of the Police Special Task Force killed during that war was 25,367. Several hundred ordinary policemen, thousands of Sinhala, Tamil and Muslim civilians and a number of political leaders also lost their lives,” he said.

Stating that Sri Lanka is the only country in the recent history of the world to have completely defeated terrorism, the Opposition Leader added that certain local and foreign interested parties never allowed things to normalise in the country.

“From the day the so-called Yahapalana government came into power, they started relentlessly persecuting the armed forces that amazed the entire world by defeating the terrorist organisation that everyone considered to be undefeatable. In 2015, the present government together with their foreign masters co-sponsored Resolution 30/1 in the UN Human Rights Council agreeing among other things to institute a special war crimes court in Sri Lanka with the participation of foreign judges, prosecutors and investigators,” Mahinda Rajapaksa further said.

The Yahapalana government has also agreed to remove from service by administrative means, all armed forces personnel suspected of having committed war crimes even if there is insufficient evidence to present in a court of law, he said. The government has already passed several laws in fulfilment of the pledges given in Resolution 30/1. Through the Office of Missing Persons Act No: 14 of 2016, the government has created an investigative body that can enter any armed forces or police installation at any time and seize any document or object and which can summon witnesses and carry out investigations even in contravention of the Official Secrets Act, the Opposition Leader claims.

Through Act No: 5 of 2018 which makes the provisions of the International Convention Against Enforced Disappearances applicable to Sri Lanka, the government has made it possible for foreign countries to request the arrest and extradition to their countries of persons suspected of being responsible for enforced disappearances in Sri Lanka, Mahinda Rajapaksa further commented. “The International Convention Against Enforced Disappearances is actually a punitive mechanism. The Mutual Assistance in Criminal Matters (Amendment) Act No: 24 of 2018 passed by this government enables Sri Lanka to provide evidence and other related matters in connection with cases being heard in foreign courts.”

The Opposition Leader says that Sri Lanka is once again confronted with a different terrorist threat as the country marks the tenth anniversary of the end of separatist terrorism.

With their very first coordinated attack, the suicide bombers on Easter Sunday managed to cause a much higher number of civilian deaths than what even the LTTE was able to achieve with such attacks the Opposition Leader remarked.

“On the tenth anniversary of the victory against the LTTE, I would like to state publicly that no war crimes were committed during the last phase of that war,” he emphasized.

The war crimes allegations being made against the Sri Lankan armed forces are politically orchestrated, the Opposition Leader further said addressing the gathering.

The full speech made by the Opposition Leader is as follows: