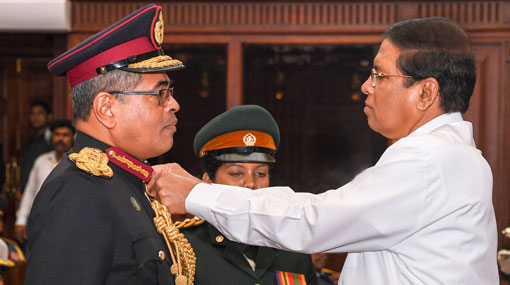 The ceremony was held at the Presidential Secretariat this morning (22).

To coincide with the ongoing National War Heroes’ commemorative programmes, ‘Dasawarshabishekaya’, the President, in his capacity as the Commander-in-Chief of the Armed Forces recognized the disciplined, noble, obedient, exceptional and unblemished record of service rendered by these senior officers for over 25 years while serving the regular forces of each armed force, Sri Lanka Army said.

Award of this VSV laurel is made in accordance with the provisions in the Extraordinary Gazette on 1 September 1981. The dignified ceremony at the Presidential Secretariat commenced soon after the President arrived at the location. The roll of honour was then read out with citations before each laureate was invited on stage to receive the Medal.

The Medal is also considered as one of the highest military decorations and a recognition that can be achieved during the course of an Officer’s career during his life-time.

A two-minute silence was observed to pay tribute to the military personnel who had sacrificed their lives for the country’s sake.