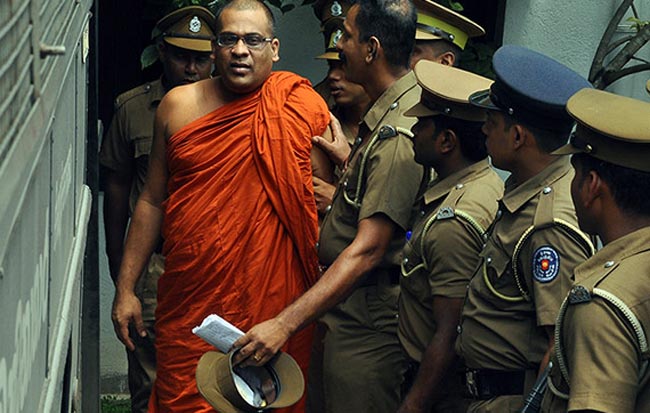 The Commissioner General of Prisons stated that has received instruction on a Presidential pardon for Ven. Galagoda Aththe Gnanasara Thero, who was arrested in 2016 over Contempt of Court charges.

Speaking to Ada Derana, he said that he has received the relevant documents containing the President’s recommendations to release Gnanasara Thero.

Commissioner General of Prisons Jayasiri Tennakoon stated that he received the relevant letter with the President’s signature, a short while ago. He said that the letter granted the Thero with a full pardon.

The Thero is, reportedly, likely to be released from the Welikada Prison later today, where he is currently held.

A strong social and political discourse was formulated regarding the release of Ven. Gnanasara Thero.

The Attorney General had filed the case against Gnanasara Thero following a petition submitted to the Appeals Court by the Former Homagama Magistrate and current Colombo Chief Magistrate Ranga Dissanayake.

General Secretary of the Bodu Bala Sena (BBS) organization Ven. Gnanasara Thero was sentenced to 6 months of rigorous imprisonment on the 14th of June 2018 for threatening Sandhya Ekneligoda.

However, defendant Gnanasara Thero had declared innocence, when the charges were presented at the hearing, claiming that he did not have a motive for the contempt of court and that the situation occurred when he became sensitive to the rejection of bail plea of the military intelligence officers who contributed to free the country.

On 8th of August 2018, Gnanasara Thero was convicted of four Contempt of Court charges and sentenced by the Appeal Court to 19 years of rigorous imprisonment, to be completed within 6 years.

The verdict was delivered by the President of Court of Appeal, Justice Preethi Padman Surasena and Justice Shiran Gunaratne.