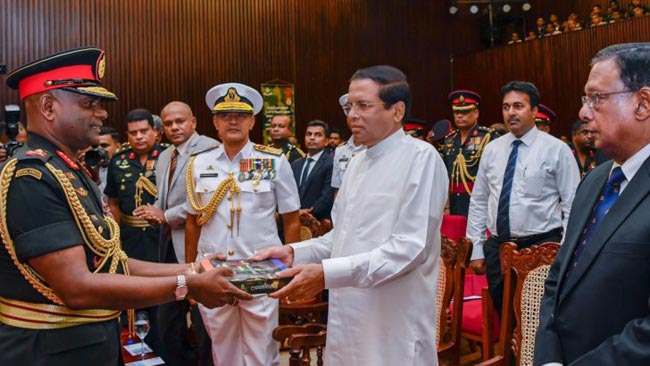 President Maithripala Sirisena says that it is a timely need to write the complete heroic story of the thirty-year-long war victory so that the future generation can read about the bravery of the great, war heroes, patriotism, and their great humanitarian nature.

The President pointed out that, by reading this story, the future generation will grow up to love the motherland and be loyal to the country and also that the true story of the thirty-year-long war, its background and the seed of the war would be correctly revealed to the world.

He made these remarks addressing a ceremony to launch the book titled ‘Uththamachara’ held at the BMICH, yesterday (22).

Speaking further at the event, President Sirisena said that the experiences and the life stories of the war heroes are excellent stories of valiant warriors. The President stated that the memories of the persons responsible for this victory should not be allowed to vanish with the end of their lives.

Immortalizing the memories of contemporary War Heroes who were posthumously decorated with “Parama Weera Vibhushanaya” (PWV), the highest gallantry award for Sri Lankan Armed Forces, the special publication, “Uttamachara” that documents their warfare achievements, gallantry and bravery in the battlefield for defence of the sovereignty and territorial integrity of the Motherland, along with the issue of a special Coin, Stamp and a First-day cover was launched last afternoon (22) at a special ceremony, dignified by the presence of HE the President Maithripala Sirisena, the Commander-in-Chief as the Chief Guest at the BMICH.

This memorable occasion of national importance, organized by the Directorate of Personnel Administration at the Army Headquarters on the directives of the Commander of the Army, Lieutenant General Mahesh Senanayake brought the series of National War Heroes’ commemoration projects to an apex. The ceremony attended by next of kin of PWV laureates and a host of distinguished guests, senior Army, Navy, and Air Force officers included a few events that preceded before the arrival of the Chief Guest.

After the traditional coconut oil lamp was lit by invitees, the first-day envelope and the 10th Anniversary (2009-2019) commemorative stamp were issued by HE the President. The second video clip including brief biographies of PWV laureates and ground operations, in which they sacrificed their lives was screened in the presence of the gathering before an introductory speech on the book, “Uttamachara” was made to the audience by the Army Commander who subsequently presented the first copy of the book to the President.

The ceremony turned emotional as the Chief Guest began presenting the “Uttamachara” copies to members of each family of contemporary War Heroes whose names would be incorporated as National War Heroes and remembered as national heroes of our times.

Afterward, the Commander of the Army, President Maithripala Sirisena handed over a cheque, worth Rs. 8 m to be used for Maharagama Apeksha Hospital.