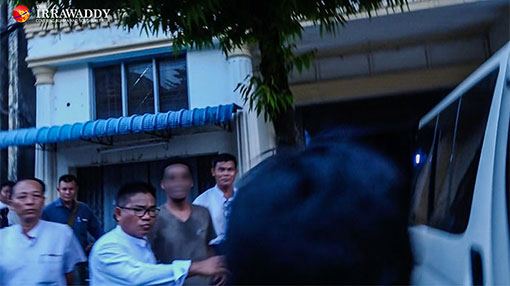 The Myanmar President’s Office said the actual suspect allegedly connected to the Easter Sunday bombings that killed at least 250 people in Sri Lanka is no longer in Myanmar.

This follows the arrest of a Sri Lankan man on Thursday believed to have connections with those involved in the attacks.

On Wednesday, the Myanmar Tourist Police sent a request to the country’s Hotel and Tourism Department to report Abdul Salam Irshad Mohmood, 39, if he registered at hotels or guesthouses in the country. On Thursday, Mohmood was detained by police when he appeared at an immigration office in downtown Yangon.

In the request, Mahmood was described as a suspect having connections with those involved in a series of bombings that killed at least 250 people in Colombo, Negombo and Batticaloa, in Sri Lanka, in April.

On Friday, the Myanmar President’s Office Spokesperson U Zaw Htay told The Irrawaddy that the Sri Lankan government had tipped them off that Mohmood was a suspect in the bombing.

“It was [later] found out that the [real] suspect had already left the country,” he said.

U Zaw Htay said Abdul Salam Irshad Mohmood and the actual suspect arrived in Myanmar in January of last year on the same flight and that the latter has remained in the country since.

Abdul Salam Irshad Mohmood, U Zaw Htay said, is a gem dealer traveling around Yangon and Mandalay. When the Myanmar Tourist Police’s alert circulated on Thursday, the Sri Lankan man turned himself in at an immigration office in Yangon to explain he had nothing to do with the bombings, but police detained him on the spot for further investigations.

“Now the police are reviewing his testimonies,” said U Zaw Htay.

The Sri Lankan embassy in Yangon was not available for comments on Friday.