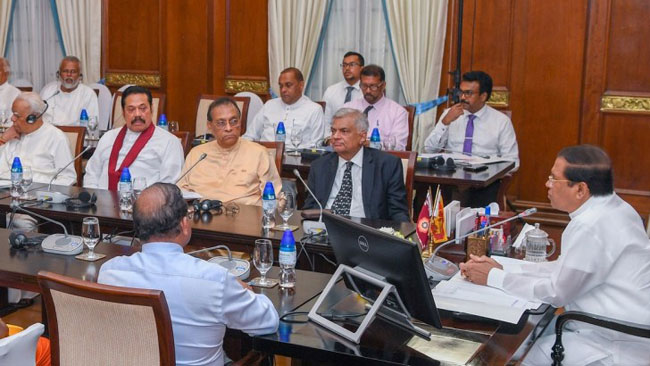 The President has decided to summon a meeting monthly to review the progress of the tasks implemented to strengthen the country’s national security while obtaining the ideas and suggestions of all the parties as well as their assistance.

The very first meeting of the Committee was held at the Presidential Secretariat yesterday (24) under the patronage of President Maithripala Sirisena.

All the representatives who attended the meeting expressed their gratitude to President Sirisena for taking steps to mitigate the situation which arose in the country recently within a short period of time, the President’s Media Division said.

Furthermore, they expressed their appreciation to the President for summoning this kind of series of dialogues, creating a platform to present the ideas, suggestions as well as allegations of all parties, and further stated that it is a timely step, it said.

Expressing his views the President said even though the terrorist activities were ended in Sri Lanka, it is utmost important to be continuously vigilant regarding the national security of the country, when considering the experiences faced by other countries in the world regarding this terrorist organization.

The President emphasized that the assistance of all parties are required in strengthening the national security of the country when considering this international conditions.

Expressing his views, the Speaker Karu Jayasuriya said that he had the opportunity to hold discussions with foreign ambassadors in the past few days and said that they are satisfied with the present security situation of the country.

Accordingly, the Speaker said that they will take steps to swiftly remove the travel restrictions imposed by some countries for tourists visiting the country and that the tourism industry would be restored within a short period of time.

Opposition Leader Mahinda Rajapaksa, addressing the gathering, stressed the importance of unity among all irrespective of political differences when working towards ensuring the national security of the country.

The Chairman of United National Party (UNP) Kabir Hashim pointed out the importance of controlling the media and the social media regarding this incident.

The Leader of the Tamil National Alliance (TNA) Sampanthan expressing his views commended the support given by the security forces to all the citizens.

Dr Sarath Amunugama said that there is a need for a broad investigation regarding the ways of financial flows to the terrorists as well as the circulation of that money and how they obtain weapons.

The Mahanayake of the Sri Kalyani Samagri Dhamma Sabha, Kotte Ven. Dr Iththepane Dhammalankara Thero said that in this instance the role that has to be play by all the religious leaders in the country is vital and further said that all of them have a full responsibility in ensuring the national unity of the country.

The President of the All Ceylon Jamiyyathul Ulama (ACJU) M.I.M. Rizvi Moulavi expressing his views said that the country should come first for all and everyone should be committed to provide any kind of support to the country.

Provincial Governors also expressed their views. They said that they believe establishing the Civil Security Committees instead of Community Police Units in a stronger and comprehensive manner, will provide more service in the task of ensuring the national security.
Speaking at the event, President Maithripala Sirisena said that he will pay broad attention regarding all these issues and, these facts will be discussed at the National Security Council and will take steps to implement them through a systematic programme.

Director General of the Institute of National Security Studies Sri Lanka (INSSSL) Asanga Abeyagoonasekera apprised regarding the enactment of new Acts on the prevention of false news.

Head of Security Divisions including the Tri-Forces Commanders also expressed their views, presented details regarding the steps that they have taken to prevent the activities of the terrorists while obtaining assistance of International Intelligence Services as this terrorists attacks were linked with an international terrorist organization.