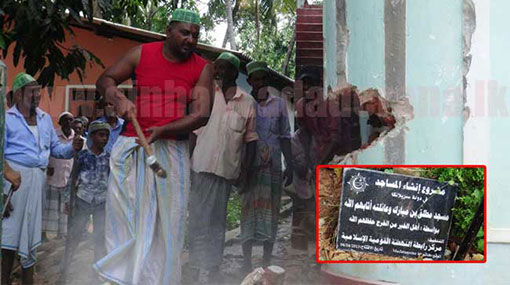 The chief of the main mosque M.H.M. Akbar Khan stated that the mosque in question, funded by a foreign organization, was erected with the support of a resident in the village on a plot of land allotted to establish a library for children.

The plaque of the NTJ’s mosque, engraved with Arabic letters and purportedly bears the names of those who sponsored the establishment of the mosque, was also demolished by the villagers,

The Muslim villagers stated that they had maintained close relations with the Sinhalese neighbours for quite a long time and that the decision to demolish the mosque was unanimously approved by the Muslim community in the area.