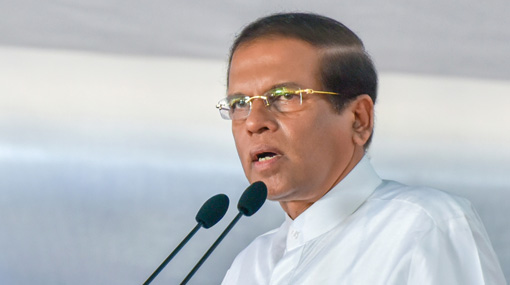 The development of the country is being hindered and irrigational, agricultural, educational and industrial revolutions suppressed due to ulterior motives of fulfilling one’s own political objectives by some political leaders, President Maithripala Sirisena has said.

These personal political agendas must not let be allowed to suppress the development of the country and the needs of the people, the President has emphasized participating in the “The ‘Wapi’ revolution of an enriched country” program  addressing the inaugural ceremony of ‘Ellanga’ system reconstruction project held  in Kurunegala district yesterday (12), the President’s Media Division (PMD) said.

The projects for harvesting 3,000 acres of barren paddy fields, empowering the agricultural economy of more than thousand families and developing 21 reservoirs was initiated near the Kotakimbuladeniya tank at Paduwasnuwara in Kurunegala West yesterday, according to the PMD.

Amidst of Pirith chanting the President has cut the first piece of soil and started the reconstructions of the irrigational systems, the PMD reported.

The President, addressing the audience, has further mentioned that, in order to conduct the conservation of the environment and the forest resources, he has launched several programmes to ensure that the breathing right of the people of the country is secured. Even though the decisions he has taken are being criticized and accusations are being levelled at him, the responsibility for securing the forest density has become a responsibility that no one could ignore, the President has remarked.

“We can march forward as a country by developing the agricultural section of the country and by strengthening the farmer,” the President has said, stressing that he would contribute solely in accomplishing every responsibility for securing the irrigational system and bringing back the lost legacy of the country.