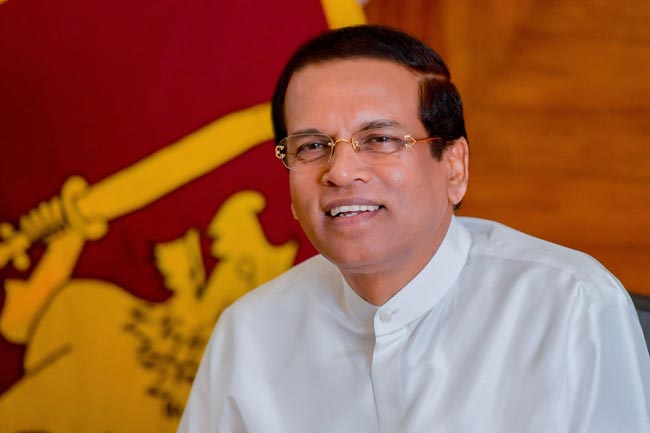 President Maithripala Sirisena states that Poson is an occasion for Sri Lankans to feel deep in their hearts, the true meaning of limitless tolerance and harmonious living as taught by Arahath Mahinda.

President says that Buddhism is a religion based on realities of the lives of the people accustomed to an independent way of life, promoting a benevolent society based on agriculture.

Complete Poson message of President Sirisena is as below:

“Poson Poya which falls on today marks the introduction of Buddhism in Sri Lanka with the arrival of Arahath Mahinda 2,326 years ago. This day we celebrate in a grandeur manner with much devotion and honor as it symbolizes the initial footprint of Buddhism in this country together with a civilization founded on Buddhism for generations to come.

The ancient people who lived on this land with numerous beliefs, rituals and homages got accustomed to an organized way of life and a greater civilization consequent to the introduction of the teachings of the Buddha based on the noble principle of ahimsa. That was indeed the most important historical turning point that gave a new pragmatic meaning to our way of life and religious beliefs. With the arrival of Arahath Mahinda, together with the Tripitaka Dhamma, unmatched art and craft to creating magnificent Buddhist Statues and pagodas are the gifts that this nation proudly inherited in significance to this remarkable point in our history.

Buddhism soon found its ground firmly on this land as it is a religion based on realities of the lives of the people accustomed to an independent way of life, promoting a benevolent society based on agriculture. An education system centered on Buddhist monks were also established by the Arahath Mahinda and accordingly “Ata Seta Len” or the 68 cave centers of learning. These turned out to be the first education centers in this country and the caves where Buddhist monk s lived gradually evolved into monasteries and temples.

Arahath Mahinda lived at Mihinthalawa Temple for a very long period of time and this Temple became a living memorial to the Great Arahath. By his simple lifestyle and the supreme bliss he enjoyed through the Buddhist way of life, Arahath Mahinda displayed an invaluable example to emulate, not only to the people but also to the kings and noblemen.

This day of Poson is an occasion for the people of Sri Lanka to feel deep in their hearts, the true meaning of limitless tolerance and harmonious living we have learned from Arahath Mahinda.

Wish you all a happy Poson celebration.”