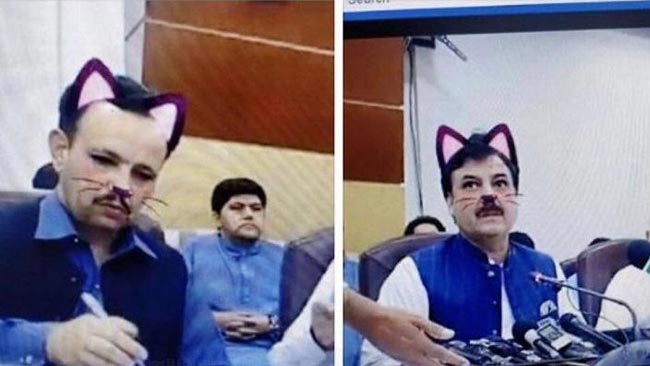 A Pakistani politician suffered a major catastrophe when his press conference was live-streamed on social media, reports foreign media.

A briefing by Shaukat Yousafzai, a regional minister in northwest Pakistan, was broadcast on his Tehreek-e-Insaf party’s official Facebook page Friday, in an attempt to keep constituents in the loop about local issues.

But the video attracted attention for an entirely different reason -- unbeknown to Yousafzai, a staffer had left on a cat filter, meaning he appeared with feline ears and whiskers throughout the broadcast.

It didn’t take long for commentators to pounce on the error, with plenty of pictures appearing online before the original video was hastily deleted, and the inevitable online mockery followed.

“Yesterday, while covering a press briefing held by KP’s Information Minister Shoukat Yousf Zai, a ‘cat filter’ was witnessed by the viewers which was removed within a few minutes,” the party admitted in a “clarification” issued on Twitter.

The statement added that the party’s “social media team is deemed to be the pioneers of Social Media in Pakistan. We ... pride ourselves in bringing Pakistani politics to (the) internet.”

The party “probed the matter first hand” and discovered that human error was to blame, they said, adding that “all necessary actions have been taken to avoid such incident in future.”

Yousafzai seemed to take the matter a little less seriously.

“I wasn’t the only one -- two officials sitting along me were also hit by the cat filter,” he joked to Agence France-Presse.