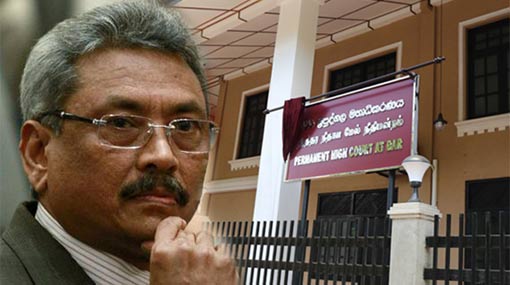 The case, filed by the Attorney General against the former Defence Secretary and six others, was taken up before the Special High Court Judges Sampath Abeykoon, Sampath Wijeratne and Champa Janaki Rajaratne today (19).

Speaking on behalf of the first defendant of the case Gotabaya Rajapaksa, Presidents Counsel (PC) Ali Sabry informed that his client was unable to appear before the court for todays trial as he had travelled overseas for medical treatment.

The former Defence Secretary had undergone heart surgery on May 31st in Singapore and was discharged from the hospital on June 9th, the defence attorney said.

As Gotabaya Rajapaksa requires post-surgery rehabilitation for six weeks starting from June 9th, the PC Ali Sabry said his client is expected to return to the country on the 22nd of July.

Pointing out that his clients presence is necessary for a fair hearing of the case, the defence attorney sought the Special High Court to move the case until his client returns.

State Counsel Wasantha Perera, the attorney-at-law representing the prosecution, did not raise objections to the request made by PC Ali Sabry.

Considering the submissions, the Special High Court judge bench moved the case to July 26th and advised the witnesses to report to the court for the next hearing on the said date.

The case was filed by the Attorney General alleging that former Defence Secretary Gotabaya Rajapaksa and six others for misappropriating state funds accumulating to Rs 33.9 million during the construction of D.A. Rajapaksa Museum at Medamulana area in Hambantota.